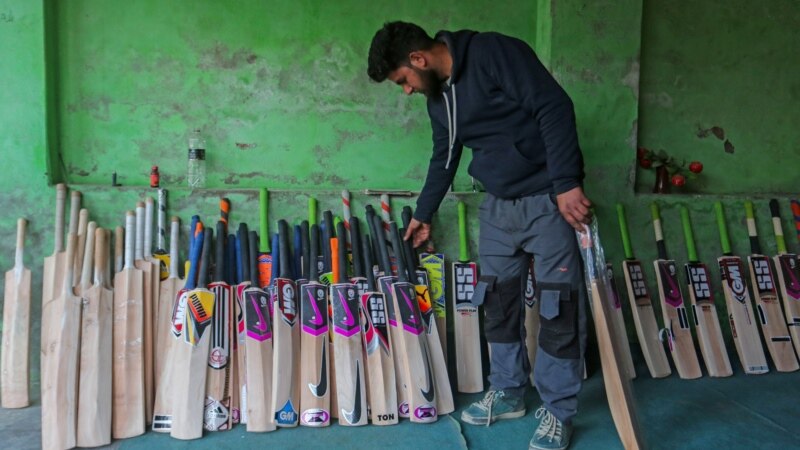 Mohammad Shafi Dar, 55, picks up a piece of willow, called a cleft, and places it on a vertical bandsaw to cut out a V-joint from the wooden block before passing it on to one of his colleagues, Mohammad Yousuf Bhat, 45, for further modification on a mechanical planer. Both Dar and Bhat are pod-shavers, as the people who make cricket bats are known, for Model Sports Industries, a cricket bat factory, in Bijbehera, a town in the Anantnag district in Indian-administered Kashmir. Following the footsteps of his father, Dar joined the multimillion-dollar cricket bat industry in the Himalayan region when he was a teenager. The industry provides income to more than 100,000 people, including migrant workers who come to Kashmir from different parts of India, such as Uttar Pradesh, Haryana, Bihar and Jharkhand. Fear of losing jobs For the first time in his four-decade career, Dar fears losing his job because of a shortage of willow, the raw material of cricket bats that mainly comes from England and Kashmir. Trunks of willow trees are first cut into lengths according to the size of the bat to be produced. The trunk sections are later split with the help of a hammer and wedge before being carved into a more familiar cricket bat shape. “In all these years, I have never felt insecure about losing the job, but in the last couple of years, bat production has decreased gradually, as a result proprietors are firing employees,” Dar told VOA. “Half a dozen men have been removed from their jobs at this workshop,” he said, adding that the situation is similar in many other factories. Skilled craftsmen who were fired, Dar said, had been making bats for decades. “A few of the fired pod-shavers went on to become casual laborers, others joined the agriculture sector and the rest became sand diggers,” Dar said. “Not everyone can cross the line from being a skilled craftsman to becoming a casual worker or a farmer,” he said, adding that locals as well as migrant workers are going through tough times. Behind the materials shortage All along the national highway connecting the Kashmir valley to the rest of India, 400 factories welcome visitors with willow-clefts piled up on both sides of the road. Fayaz Ahmad Dar, president of the Kashmir Cricket Bat Manufacturers Union, told VOA the raw materials shortage began five years ago because of accelerated tree cutting and a lack of planting of new willow trees in the region. “Today we only receive 50% of the supply in our factories,” Dar said. “Our business is on the verge of extinction due to complete negligence,” he added. Local farmers, Dar said, plant poplar or cottonwood instead of willow because they grow quickly and are in demand by plywood factories, earning them money faster. “We cannot blame local farmers for not planting willow as it is their own choice,” Dar told VOA. “We expect (the) government to act as soon as possible in order to inject new blood into Kashmir bat industry, as it generates income worth 1 billion rupees [$12.1 million],” he said. Kashmir willow bats, Dar said, supply nearly 70% of the global market, as they are more affordable than those made from English willow. “The price of a good quality English willow starts from $300 and can go up to $1,500, but the same quality bats produced locally begin from $50 and vary up to $500,” Dar said. “Thus, people belonging to cricket-playing nations prefer to buy our bats, thus making Kashmir the largest exporter of cricket bats in the world,” he said, adding that nearly 3 million bats are manufactured in Kashmir annually and are exported to 125 cricket-playing countries. In a new workshop of GR8 Sports in Anantnag’s Sangam neighborhood, Niaz Ul Kabir, co-owner and production head, ensures each bat is manufactured according to his brand’s standards. Kabir said GR8 Sports marketing agents approached several international cricketers to test GR8 Sports bats. He said the response from the veteran cricketers spurred them to approach the International Cricket Council, the governing body of international cricket, and get approval so that international cricketers can use their product. 50 out of 400 factories shut Kashmir cricket bat industry stakeholders have approached the Kashmir government for help, as 50 out of 400 factories have closed workshops because they are out of raw materials. “We met the honorable director of commerce and Industries of Kashmir and highlighted the issues bat manufacturers are facing,” Dar, the president of Kashmir Cricket Bat Manufacturers, said. “The director was presented with the facts and figures about the growing demands of cricket bats globally following the expansion of the sport from 10 countries to over 100 countries in the last decade,” he added. The manufacturers, Dar said, want the government to identify multiple locations for the planting of willow trees in Kashmir. Dar said after the meeting the department, in association with the Faculty of Forest of Sher-e-Kashmir University of Agricultural Sciences and Technology of Kashmir, distributed 1,500 willow saplings to many bat manufacturers, which he said, “in no way is sufficient meet the requirement.” Dar added that the annual demand of one manufacturer is 10,000 to 15,000 trees. VOA asked Saloni Rai, director of commerce and industries of Kashmir, for her response to the industry representatives. She said that she “does not currently have enough information regarding the subject and will comment after going through the data thoroughly.”

Previous Active Covid cases dip to 3,913
Next Regrettable that govt, judiciary not adhering to timelines in filling up HC vacancies: Par panel

Afghan Academic Rebuilds Her Life in Italy, Dreams of Returning

No Light, No Heat in Minus-30-Celsius Cold Sparks Anger in Kazakhstan