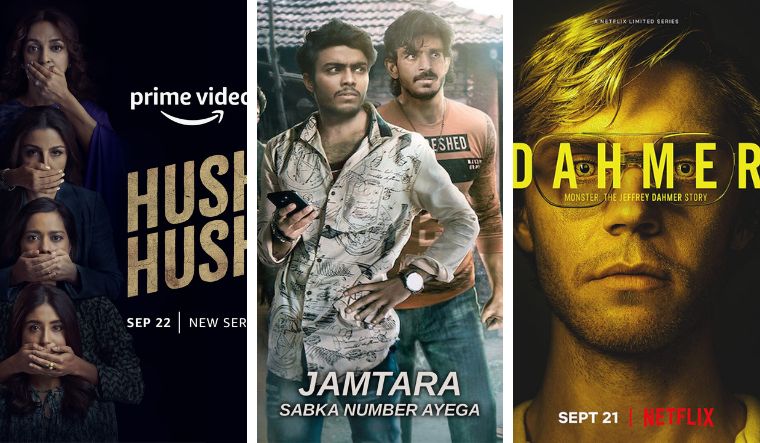 With a bunch of new movies and shows, OTT viewers have a lot to look forward to this week. Here is a quick look at what’s releasing on various streaming platforms this week.

The mystery thriller series revolves around a set of women whose lives take an unexpected turn, and secrets from their past come to the fore. Created by filmmaker Tanuja Chandra, the series features Juhi Chawla, Ayesha Jhulka, Soha Ali Khan Pataudi, Kritika Kamra, Shahana Goswami and Karishma Tanna. “Knitted in a web of lies, deceit and fighting patriarchy, the story explores the storm that brews behind the seemingly quiet facade of the privileged lives of these women,” the official plotline read.

The upcoming Star Wars series is a prequel to the 2016 film Rogue One. It revolves around Cassian Andor who turns into a rebel hero in the formative years of the Rebellion. Of the 12 episodes of seaon 1, three episodes will arrive on September 21. The series features Diego Luna, Stellan Skarsgård, Adria Arjona, Fiona Shaw, Denise Gough, Kyle Soller and Genevieve O’Reilly.

Starring Tamannaah Bhatia in the titular role, the Hindi comedy drama revolves around Babli, a small town girl who moves to Delhi to find a job. She eventually becomes a bouncer. The film directed by Madhur Bhandarkar also features Abhishek Bajaj.

Inspired from true events, the series is based on events from Jharkand’s city of Jamtara, India’s con centre. The first season took the audience deep into the workings of phishing scams and cyber crime. The story of young school drop-outs who incept an elaborate phishing scam raking in fortunes, only to be intercepted by the police and local politicians, reads the show’s synopsis. Sparsh Shrivastav, Anshumaan Pushkar, Monika Panwar and Amit Sial will reprise their roles as Sunny, Rocky, Gudiya and Brajesh in the upcoming season.

The biographical crime series explores the life of Jeffrey Dahmer, one of America’s most notorious serial killers. Created by Murphy and Ian Brennan, the 10-part series chronicles the crimes of Dahmer, told through the eyes of his victims. Known as the Milwaukee Monster, Dahmer killed and dismembered 17 people—all young boys and men—between 1972 to 1991.