Palash Sen, the frontman and founder of India’s pop-rock band Euphoria, is a fan of Pakistani singer and actor Goher Mumtaz. Sen sang praises for the Sajni singer and acknowledged his impact on Bollywood music while criticising Indian music directors who have blatantly copied and still continue to take “inspiration” from Jal’s style of melodies and lyrics. 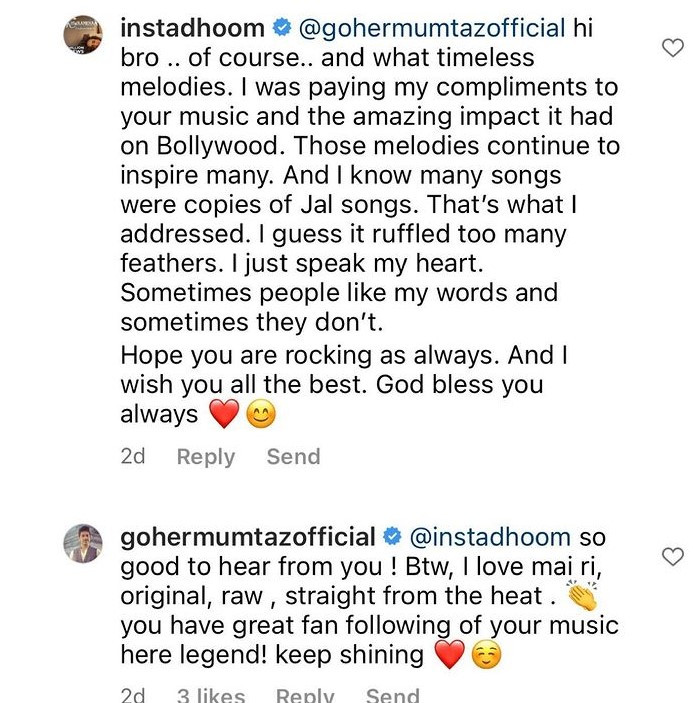 He wrote, “Goher Mumtaz, hi bro. What timeless melodies. I was paying my compliments to your music and the amazing impact it had on Bollywood. Those melodies continue to inspire many. And I know many songs were copies of Jal’s songs. That’s what I addressed but I guess it ruffled too many feathers.  I just speak my heart. Sometimes people like my words and sometimes they don’t.”

He further sent his best wishes to Mumtaz. “Hope you are rocking as always. And I wish you all the best. God bless you always.”

It’s fair to say Sen’s love for Mumtaz’s music isn’t one-sided. The Dil Haray singer wrote back and said, “So good to hear from you! Btw, I love Maeri. It’s original, raw, and straight from the heat. You have a great fan following of your music here [in Pakistan], legend! Keep shining.”

On the work front, Mumtaz will next be seen in his debut production film titled Abhi. The romantic musical will see him acting alongside Kubra Khan and Hareem Farooq in the lead roles. The Asad Malik directorial is scheduled to release by the end of this year.