Do not share videos: Ushna Shah, Bilal Qureshi among others demand justice for Khadija

In yet another case of violence against women in the country, an influential businessman along with at least five other men allegedly abducted, tortured and sexually assaulted a medical student in Faisalabad on Wednesday. Police took action against six suspects after footage of the victim being attacked and humiliated spread like wildfire on social media.

Many condemned the harrowing visuals from the viral clip and celebrities among others are calling on people not to circulate victim’s face on social media.

Ahsan Khan, while condemning the shameful deed, asked users to shame culprits rather than share the clip. “Rather than sharing the viral video of a young woman who was brutally tortured and humiliated for refusing this lowlife’s proposal. it’s better to shame the culprit and the woman who was filming all this,” the Fraud star penned on Instagram. 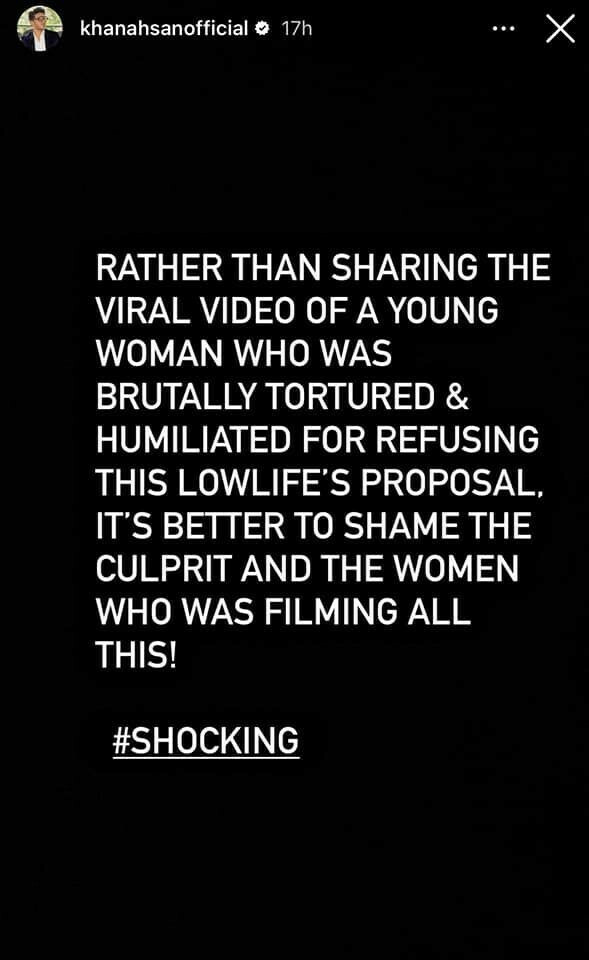 “Here we go again! Justice for Khadija is trending. Every day a new name, a new hashtag. This vicious cycle of torture and ugly display of power seems never-ending. I’d request everyone to please hide Khadija’s face! And to the perpetrators (both men and women) May you rot!” activist Muniba Mazari tweeted.

And to the perpetrators (both men & women) May you rot!!!

Bilal Qureshi appreciated the police for arresting the perpetrators. He then asked why the daughter, Ana Ali, who had a major part in abusing Khadija, hadn’t been arrested yet. “Mazloom ko nahi zalim ko viral karo [Make the oppressor viral, not the victim],” he wrote. 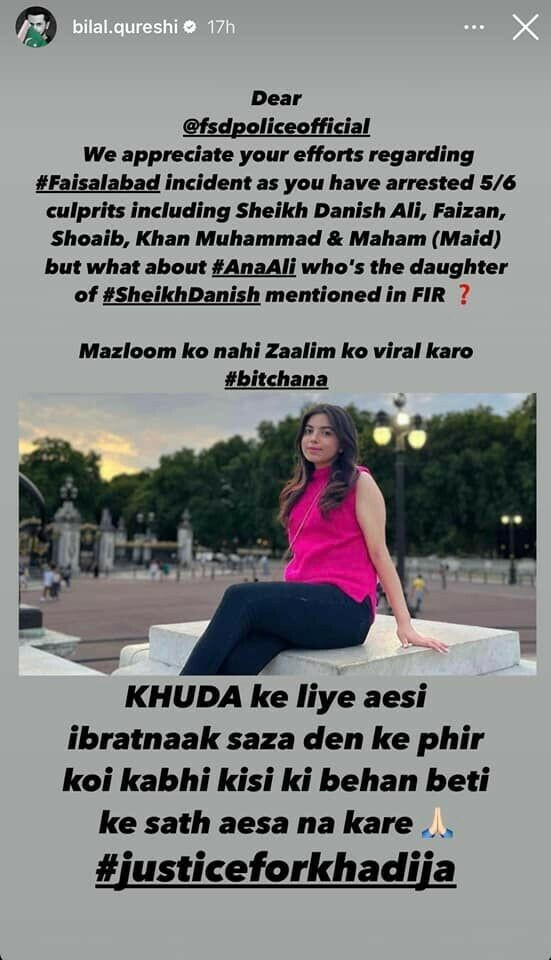 “Speechless and angry but unfortunately she won’t get justice because of our poor system! She will be just like other victims who are still fighting to get justice,” said model Alyzeh Gabol. “May Allah helps all those who are helpless in front of animals like these. 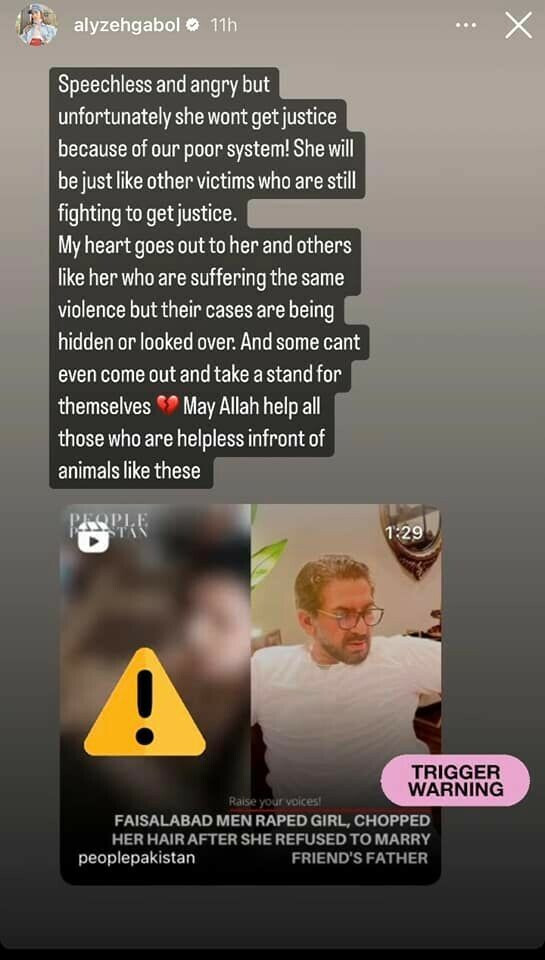 Samina Peerzada took to Twitter and tweeted an exasperated plea, questioning about deteriorating law and order situation in Pakistan. “What’s happening in my country,” the veteran star shared.

Ushna Shah shared, “My darling sister Khadija, if you are reading this, you are not who has been shamed, it is the monsters who did this to you. May you heal from this trauma and come out stronger than ever.”

My darling sister Khadija, if you are reading this.. YOU are not who has been shamed, it is the monsters who did this to you. May you heal from this trauma and come out stronger than ever. Sending all of my love to you. #justiceforkhadija

In the harrowing visuals, Sheikh Danish Ali, who runs a lucrative textile business in Punjab city, along with Maham, a classmate of the victim, can be seen not only mercilessly thrashing Khadija Mehmood but also hurling verbal abuse her way at their residence in the upscale Paradise Valley.

A case was lodged against Danish, along with his daughter Ana Ali, who was a classmate of the alleged victim in university. According to the police report, Khadija, a final year student of BDS, was Ana’s friend and would often visit her home. Danish began to develop feelings for Khadija and asked his daughter to send her a marriage proposal. Khadija, however, spurned his proposal after which Ana began sending the victim death threats. Upon receiving these threats, Khadija cut off all contact with Danish and his family.

On August 9, Danish and his daughter, along with a group of men, broke into Khadija’s home and kidnapped her as well as her brother. According to the FIR, they also stole valuables including Khadija’s iPhone 13 Pro Max, gold bangles and Rs500,000.