Pakistani athlete Nooh Dastagir Butt raised the green flag high as he made history by bringing the first gold medal home from the Commonwealth Games (CWG) 2022. Butt, a weightlifter, swiftly lifted 173kg in a snatch in the 109+kg category while in clean and jerk, he lifted 232kg and set another record. Overall, the gold-medalist lifted 405kg which itself created a new high record in CWG 2022.

Proud of the national win, artists took to their social media with pictures of Butt lifting the heavy weights and of him holding his medal high to congratulate him and extend their wishes.

However, just a day after Butt’s big win, Pakistan Sports Board (PSB) issued a notice of suspending the Pakistan Weightlifting Federation and celebrities did not hesitate to point out the irony.

“I take pride in the stupendous victory of Nooh Dastagir Butt. He deserves all the accolades and love that’s being showered on him,” wrote actor and producer Adnan Siddiqui on Twitter. Butt replied with gratitude and wrote, “Thank you so much, sir.”

Famed director Nabeel Qureshi also took to his social media and said Butt’s win was “much needed” in these trying times. “Wow! It really is gold. Much needed in the month of August,” he wrote.

TV host Shaista Lodhi also took to the micro-blogging app and wrote, “It’s a golden moment for Pakistan,” and congratulated the gold-medalist for making history.

However, the congratulations soon turned to fury as the celebrities learned about PWF’s suspension. Actor Aijaz Aslam, who first tweeted about Butt’s golden win, took to the bird app once again to condemn PSB’s “atrocious” decision.

This nation never ceases to surprise me should we not b receiving our champions home rather then suspending the weight lifting federation of Pakistan should we not be proud what are we trying to do? What is the purpose of doing this action now?This is atrocious #noohdastagirbutt pic.twitter.com/ZlxRSWmtGq

Actor Ushna Shah also took to her Instagram stories with a collage of a local publication’s article about Butt’s win being celebrated and a screenshot of PSB’s tweet about the suspension. Highlighting the opposing parallels, she wrote, “Is this how we thank our heroes?” 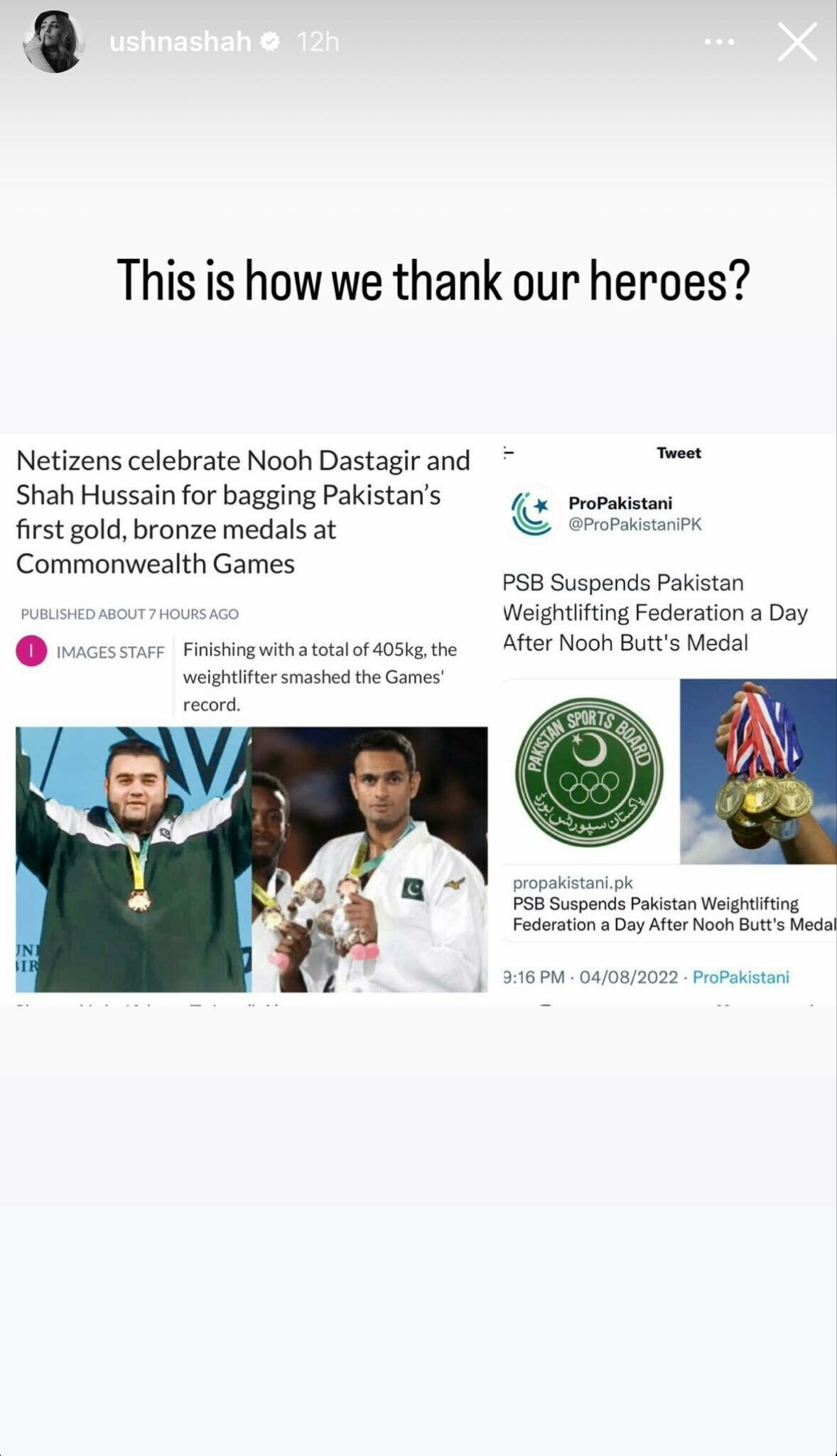 Sports have always been undermined in this country and most of them reach heights and represent their nations despite the hardships they face here. The least our government can do is provide them with support, acknowledgment and resources to follow through with their passion to encourage young aspiring athletes to bag more medals for the country.

Previous Why should I lie?: Saba Faisal opens up about her cosmetic procedures
Next Lawn bowls gives CWG minnows a chance to shine