I love you guys: Hasan Raheem thanks fans for birthday wishes

Hasan Raheem has been all the rage since his famous tracks became the talk of the town. The singer, who has delivered hits such as Joona, Aisay Kaisay, and Paisa, recently took to Instagram and Twitter, thanking his fans and followers after receiving wholesome wishes on his 24th birthday.

Posting a selfie, sporting a toothy grin and a peace sign, the crooner thanked fans for their heartwarming wishes. The selfie appears to be a spur-of-the-moment decision, a reflection of his relaxed personality. 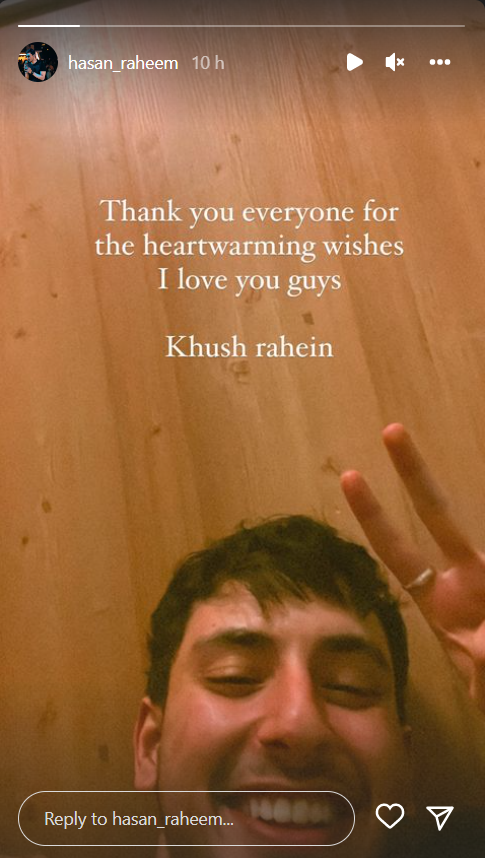 “Thank you everyone for the heartwarming wishes. I love you guys. Khush rahein,” Raheem posted. Sharing similar sentiments on his Twitter, Raheem made sure to convey to his fans his immense gratitude for them.

Thankyou for the birthday wishes, i love you!

“Thank you for the birthday wishes, I love you!” the singer tweeted.

Fans replied to the tweet with more wishes and messages of goodwill.

A very happy and blessed birthday wish for you Hassan. You are just so fabulous. I am a millennial but just love your craft.

Raheem, who hails from Gilgit-Baltistan, rose to fame within his primarily young adult audience. His music, a fusion of mellow R&B and rap, quickly made a place for himself in the budding realm of local indie and hip hop music.

The singer stands out for his laid-back music videos, smooth dance moves, and hits such as Joona that effortlessly have everyone listening on repeat. Raheem recently gained recognition in the mainstream music scene after his Coke Studio Season 14 song Peechay Hutt, in collaboration with music producer Talal Qureshi and singing duo Justin Bibis.

Previous Bulletproof car to firearms: How Salman is beefing up his security post death threats
Next China summons US envoy to Beijing over Pelosi’s trip to Taiwan