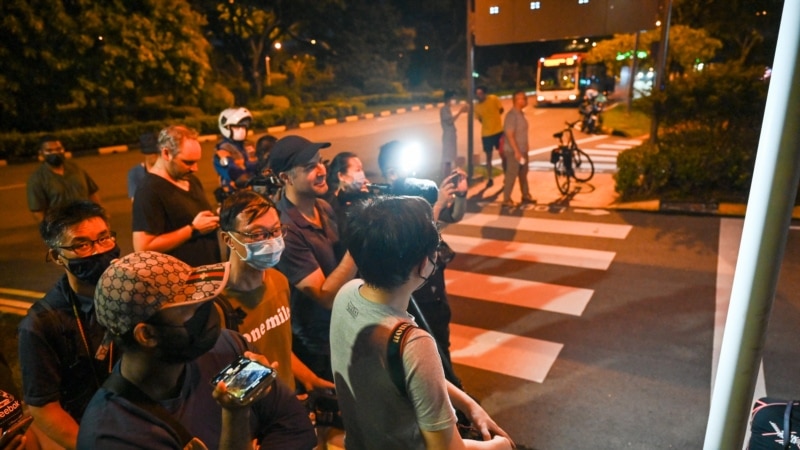 Sri Lanka’s president, Gotabaya Rajapaksa, has gone to Singapore from the Maldives, where he had first landed after fleeing angry protests triggered by a deep economic crisis that people blamed on his administration.   Although Rajapaksa had pledged to resign by Wednesday, he has not stepped down, deepening political uncertainty and anger in Sri Lanka.   Singapore could however be only a layover destination for the embattled leader.    Singapore’s foreign ministry said in a statement that Rajapaksa has been allowed entry on a private visit. “He has not asked for asylum and neither has he been granted any asylum. Singapore generally does not grant requests for asylums,” the ministry said.  In Colombo, protesters vacated official buildings Thursday, including the president and prime minister’s official residences and offices that they had occupied in recent days.   A curfew was imposed in the city and troops patrolled the streets, but the capital was calm a day after thousands of protesters stormed the prime minister’s office demanding that Ranil Wickremesinghe, who has been appointed acting president by Rajapaksa, also step down.   Although the protesters had earlier vowed not to vacate the buildings until the two leaders resigned, they appeared to have shifted tactics, saying that they want their movement to remain peaceful.   “In a people’s struggle like ours, moments of victory don’t last forever. When we occupied the official buildings, there was a symbolic meaning to it,” Chameera Dedduwage, one of the protesters, told VOA. “Now that the president has left the country, it is not necessary to hold on to them. But the fact that he is holding on to his resignation letter as a bargaining chip, while the people suffer is abominable.” Popular protests demanding a leadership change had erupted in the country after its economy spiraled into crisis earlier this year resulting in severe shortages of food and fuel. They have been largely peaceful but frustrated people stormed the president’s home and office after Rajapaksa defied calls to step down. The protesters have vowed to continue their struggle to press for the resignation of Wickremesinghe, calling him part of the same political system that has brought the country to the point of economic collapse.   “We will do it in a peaceful manner, in a patient manner,” said Manuri Pabasari, a protester. “But we will persevere to change the system that the Rajapaksas represented.”  Wickremesinghe had taken over as prime minister in May to lead efforts to restore the economy, but he has also become a target of public ire.    “He is seen as a proxy for the Rajapaksas,” points out Murtaza Jafferjee, chairman of the Advocata Institute, a research organization in Colombo. “His party has a single seat in parliament and therefore he has no legitimacy and people are not accepting him.”  Wickremesinghe has said he will only resign once a new unity government is in place and has asked the speaker of parliament to find a new prime minister agreeable to both the ruling and opposition parties.   However, a leadership transition could be chaotic as the political parties are deeply divided. Lawmakers have agreed to elect a new president next week but will have to wait until the president formally steps down.  The political instability is causing concern because it will delay urgent efforts needed to address the economic crash that has led to enormous hardship for the country of 22 million. Sri Lanka is left with virtually no foreign exchange to import essential commodities and most people are coping with massive hardship as prices of food soar, fuel supplies run out and long hours of power outages become the norm.   Ongoing talks with the International Monetary Fund for a bailout were seen as key to begin the process of putting the economy back on track, but the political flux will likely set them back.   “We were hoping to finalize a staff-level agreement with the IMF this month, but it does not look like that will happen,” says Jafferjee. “The political situation will have a huge impact on economic recovery.”

At 75, India Seeks Way Forward in Big but Job-Scarce Economy