There has been a Pakistani film industry vs the state argument going on ever since the Marvel film Doctor Strange in the Multiverse of Madness was released and took over all prime slots in cinemas leaving the five local Eid releases hanging on the thread of financial ruin.

Producers and directors called a press conference and took to their social media handles to ask for support for their films. In solidarity, many are now speaking up against the clash and while most of them have been on a roll to reverse or prevent similar clashes in the future, actors Humaima Malick and Zahid Ahmed, giving a nod to the critique of social media users, have asked for our industry to do better.

Taking to her Instagram Stories to present a reality check, Malick asked filmmakers to prioritise “healthy competition” instead of just playing amongst each other. She wrote, “Dear industry, cinemas are not private TV channels where you can pay monopoly, politics, and give favours to only your favourite ones. First, we banned Indian content and now we’re onto Hollywood, [how about] we just play amongst ourselves only like we do during our award shows?” 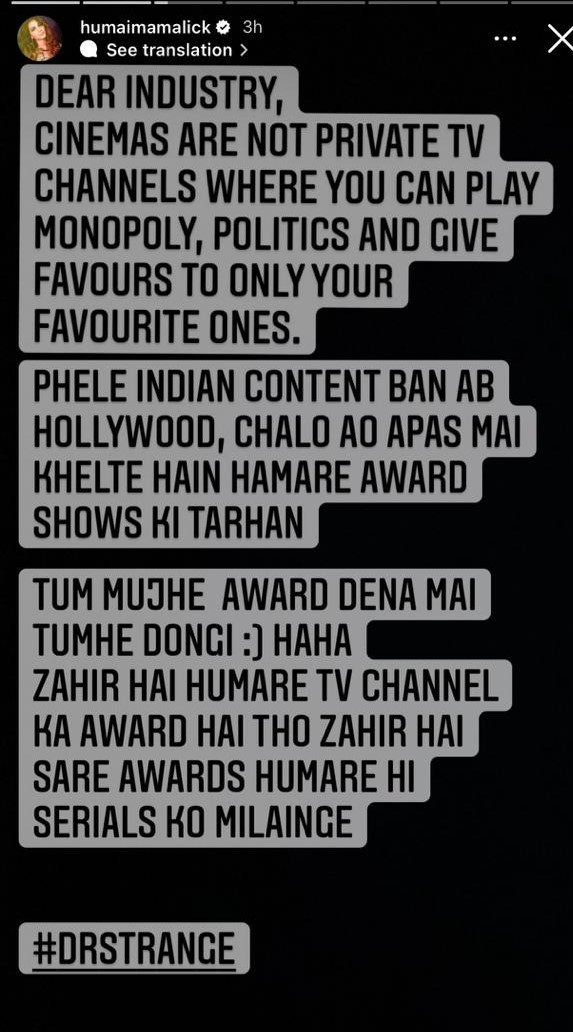 Giving the example of alleged nepotism during award shows, the Bol actor took a jibe at those calling for a delay of Hollywood releases in Pakistan for threatening the business of local releases. “Tum mujhe award dena, mai tumhe dungi. Zahir hai hamare TV channel ka award hai toh zahir hai sare awards humare serial ko milenge (I’ll give you an award and you give me one. Of course, it’s our channel’s award show so it’s a given that our serials will win all awards).”

In the name of advice, Malick asked the industry to be competitive or open their own cinemas as an alternative.” Come on, film industry, be competitive and do healthy competitions or every TV channel and [producers should buy their own cinemas. Then all of you can be happy promoting your own films and shows on your own channels and platforms and show it to your fellow industry friends as well. Allah Allah Khair se Allah.” 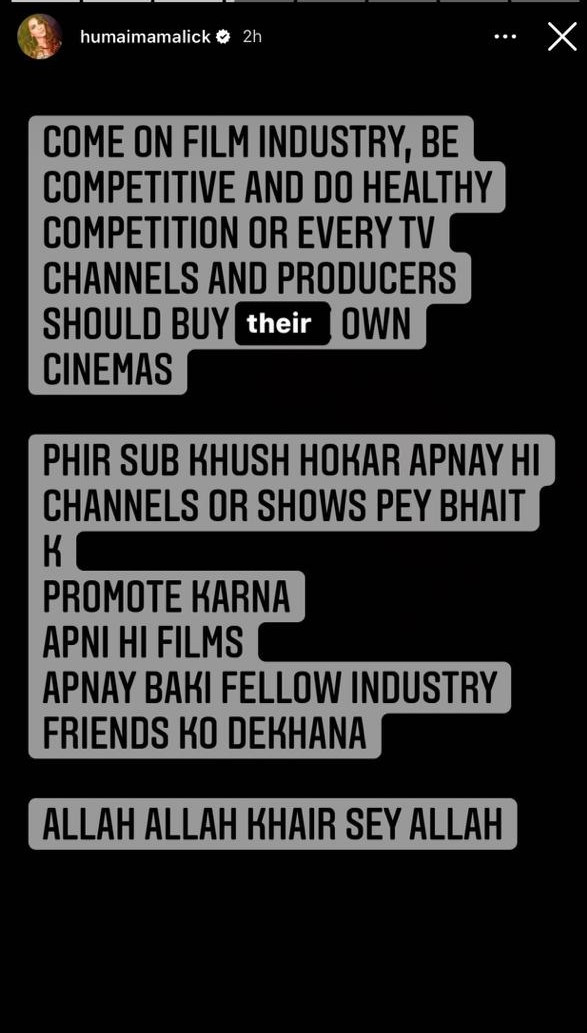 Ahmed, the lead actor in the crime comedy Ghabrana Nahi Hai, also took to his Instagram Story to present a similar argument, only less harsh. “A quality film will pull its audience, no matter what else is being released. Let’s focus on improving our quality, we’ve made considerable improvements already. Let’s not let strange doctors deter us,” he wrote. 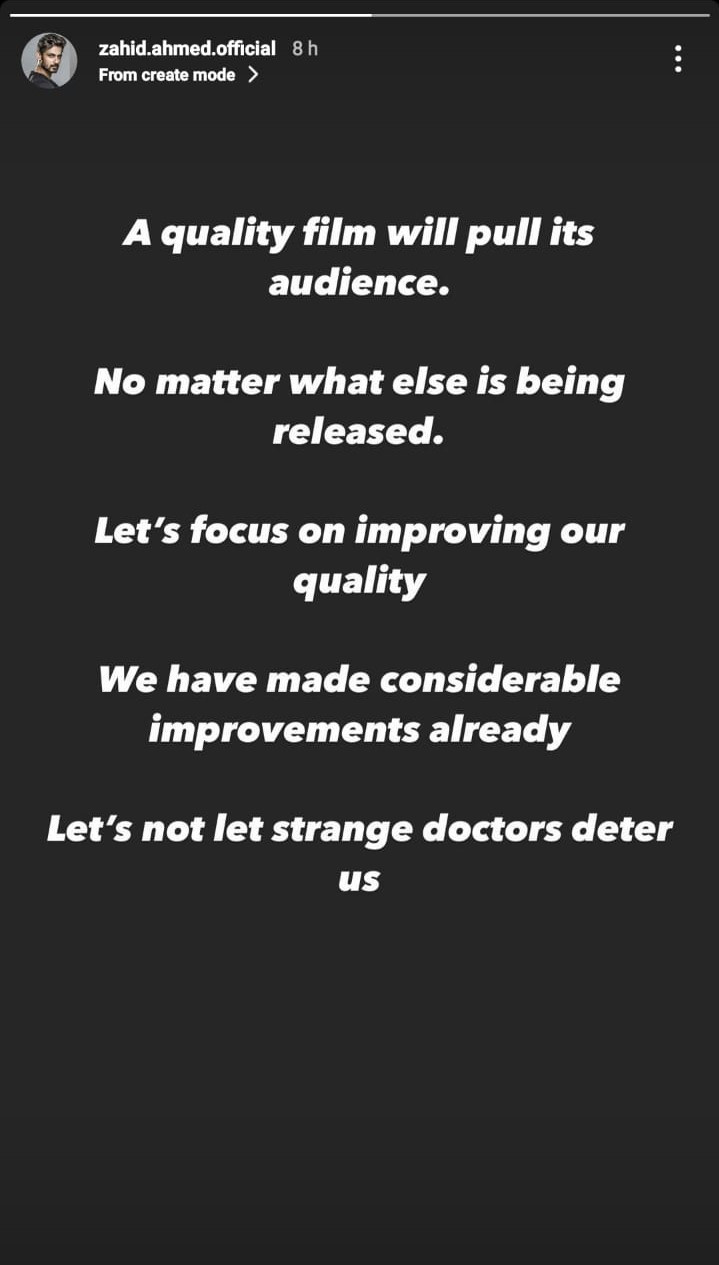 But celebrities like Hareem Farooq, Farhan Saeed, Zhalay Sarhadi, amongst others, have lent their support to the filmmakers of Eid releases and suggested that Doctor Strange could have been delayed to level the playing field.

Sarhadi called for all units of the industry to unite saying, “If we keep taking the sahara [support] of foreign films and not give our own a fleeting chance, let’s dig our graves abhi se [from now].” She reminded them that it is not time for shade or critique because this affects everyone, not just the films that are currently battling for space in the cinema. 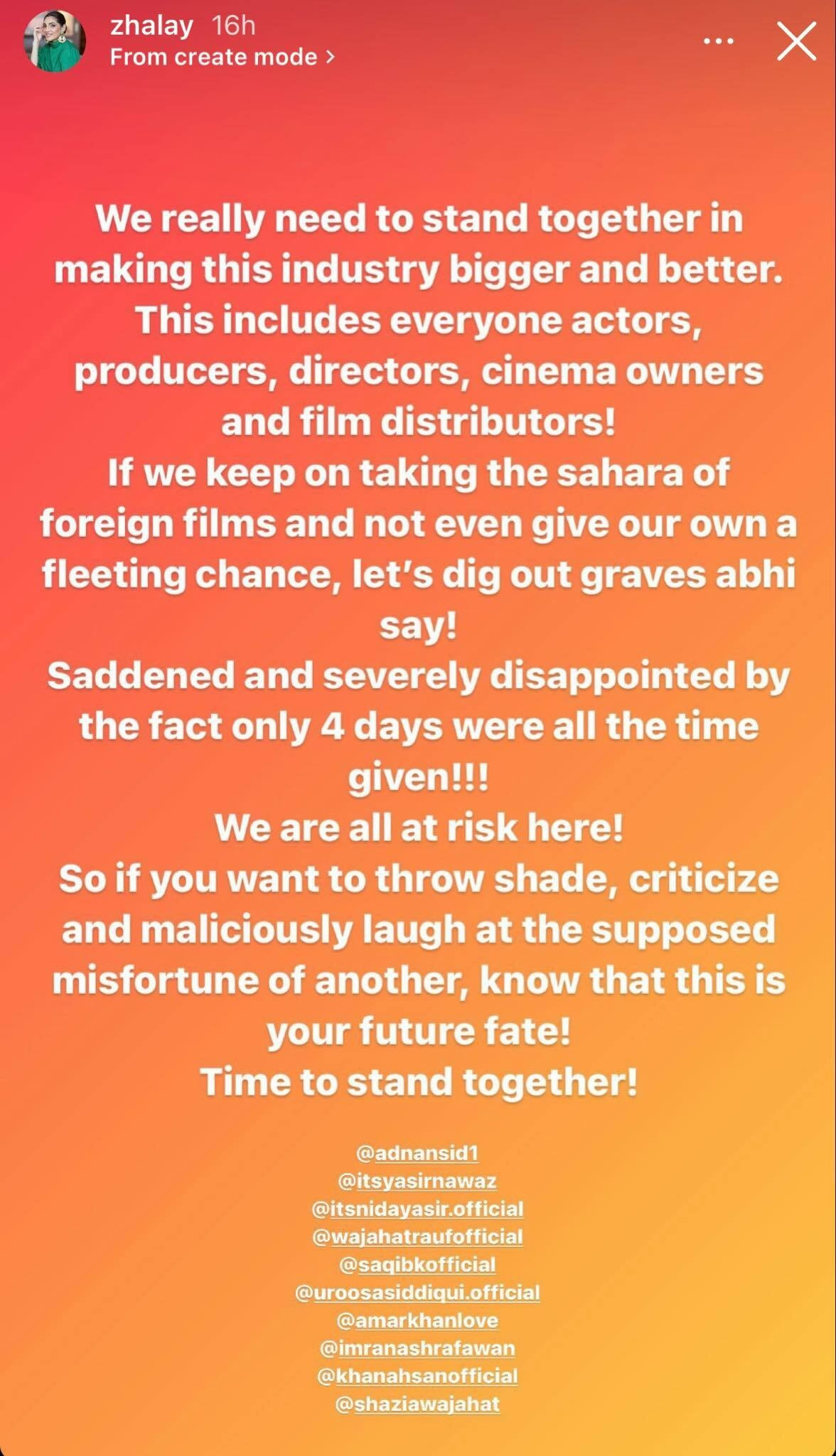 Actor and singer Saeed reinstated his support for local filmmakers and recognised their efforts despite the pandemic. “In these difficult times post-Covid, I stand with all the Pakistani films makers who despite all the difficulties had the courage to come up with their movies and request the cinema owners not to prefer foreign content over local.”

In these difficult times post covid , I stand with all the Pakistani films makers who despite all the difficulties had the courage to come up with their movies and request the cinema owners not to prefer foreign content over local. #supportpakistancinema

Farooq repeatedly asked why local films that were finally bringing some life into the industry were pitted against a foreign film. “Putting up a foreign film when there are five good Pak[istani] films going houseful, why?! Pak[istani] cinema revives after decades, gets damaged by [the] pandemic and then just as it’s about to restart, a foreign film is released. why?! Let’s find a good reason why it couldn’t be delayed by a few days, why?!”

Putting up a foreign film when there are 5 good pak films going housefull, WHY?!Pak cinema revives after decades, gets damaged by a pandemic & then just as its about to restart a foreign film is released WHY?! Lets find a good reason why it couldn’t be delayed by a few days WHY?!

During an urgent press conference arranged by the filmmakers on Sunday at Arts Council, director of Parde Mein Rehnay Do Wajahat Rauf shared a news snippet, which he later posted on Instagram, that discussed the negative impacts of foreign films and tagged the authorities, asking them to intervene to ensure fairness and the survival of the Pakistani film industry.

“The Motion Picture Ordinance of Pakistan says you can’t exhibit more than 15% foreign content on occasions like Eid. Here we have five Pakistani films with sold-out shows in prime time shows (some sold out even at 3 am) and they are either taken down or given 70 per cent fewer shows, most of which are at odd timings. We appeal to PM Shahbaz Sharif, ISPR (Inter-Services Public Relations) and Maryam Aurangzeb to interfere, to regulate. and be fair. All movies local or foreign should get an equal opportunity or this will [be] the death of the industry…once again,” he wrote.