Syra Yousuf, Zara Noor Abbas, among other stars, light up the streets for Imran Khan

These past few days have been a political turmoil for Pakistan with Imran Khan being ousted as the Prime Minister through a vote of no-confidence. The people of this nation, however, have made it clear that they are not ready to forfeit or give up on him.

The hashtag Behind You Skipper became a top Twitter trend on Sunday as PTI supporters took the streets to express their dismay at the democratic decision. Natives of all age groups and genders marched their way towards landmarks designated by PTI rally organisers across Pakistan and beyond, to bring back into power the leader they voted for.

The nationwide protests erupted in response to the call of the PTI chairman. Earlier in the day, Imran had tweeted that his removal from office marks the beginning of a “freedom struggle” against a “foreign conspiracy of regime change”. The former prime minister wrote, “Pakistan became an independent state in 1947, but the freedom struggle begins again today against a foreign conspiracy of regime change. It is always the people of the country who defend their sovereignty and democracy.”

Celebrities, who have been actively voicing support for Imran throughout his three-and-a-half-year tenure, did not shy away from joining hands with the masses cheering for him in Karachi, Lahore, and Islamabad, among other cities. Those who couldn’t make it shared pictures and videos of the massive show of power to virtually raise their voice against an “imported government”.

Syra Yousuf, Zara Noor Abbas, Muneeb Butt, Azfar Rehman, Qurutalain Balouch and Ahmed Ali Butt are among the few celebrities that were spotted at the marches. The Sinf-e-Aahan actor took to her Instagram Stories to share on ground scenes from the rally she joined alongside her sister Palwasha Yousuf and the rest of her family. Pictures and reels saw them smiling while echoing chants of support. 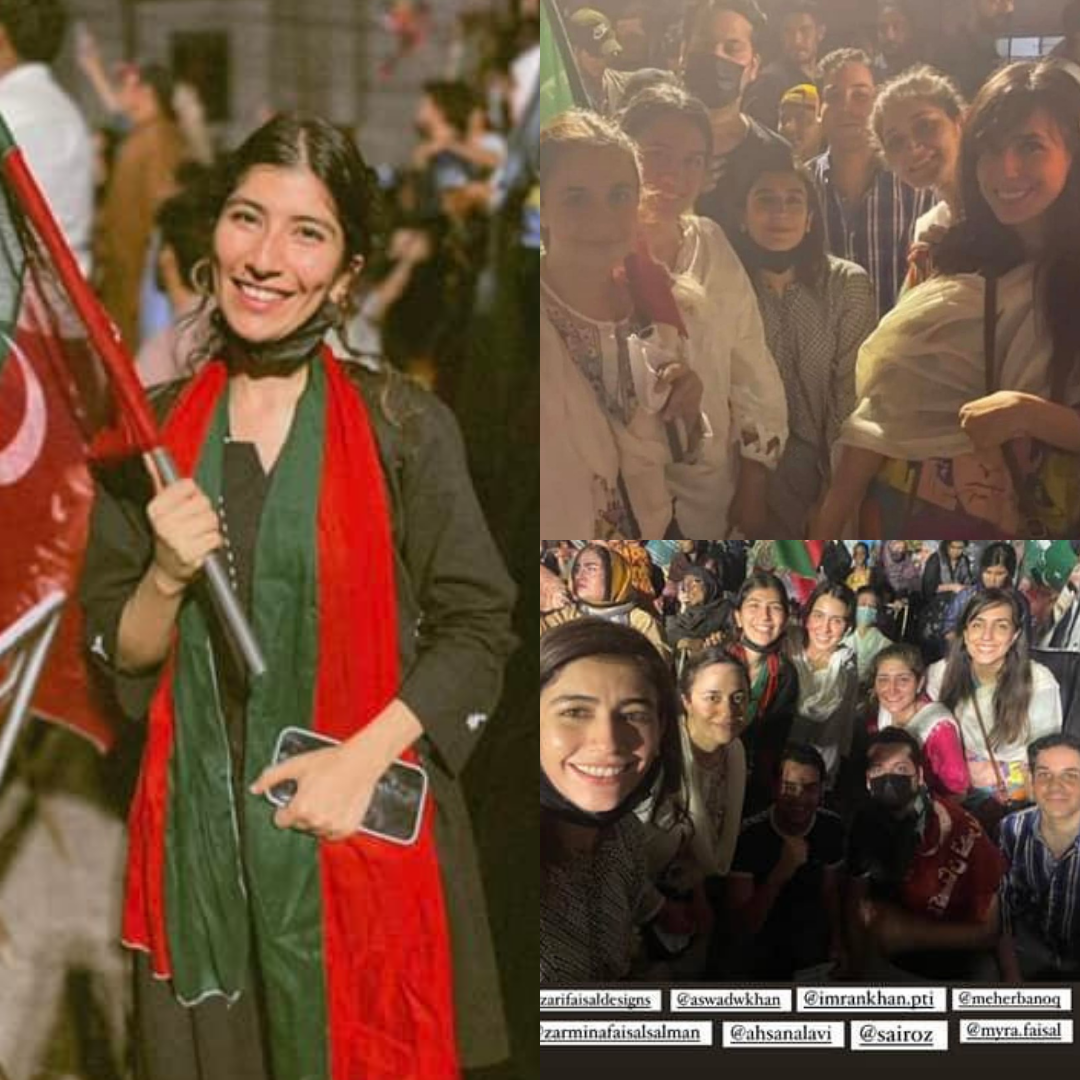 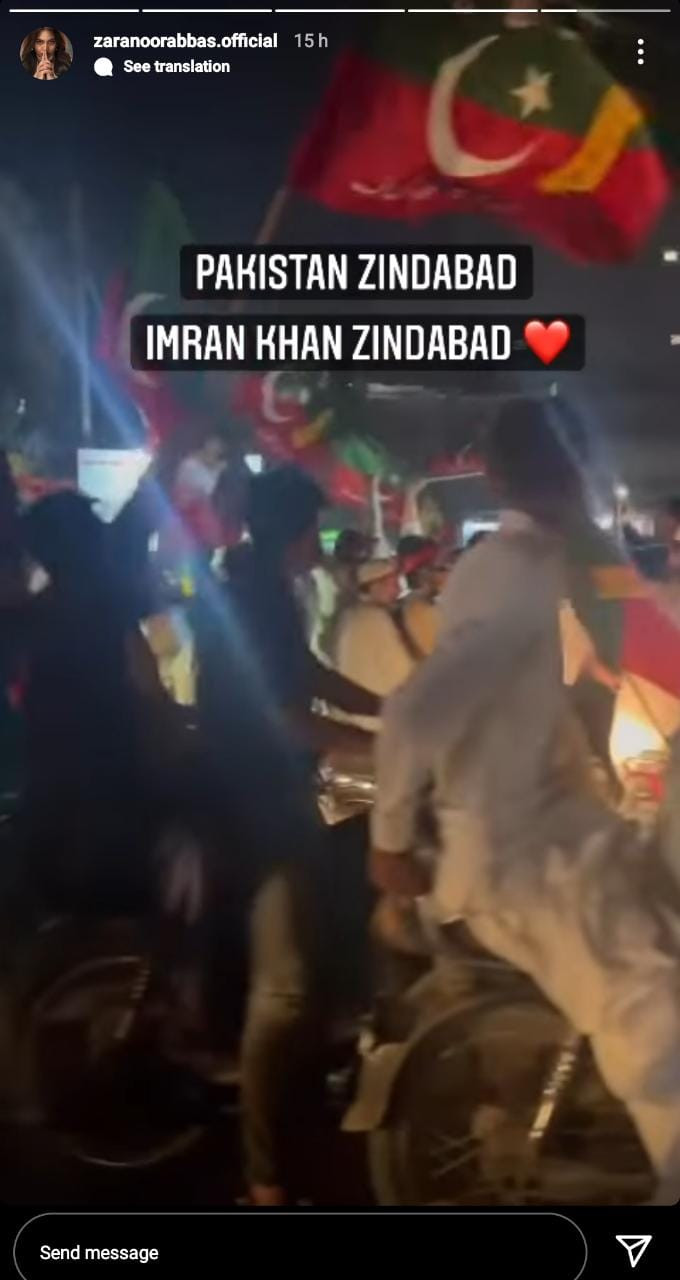 Actor Sarwat Gilani also shared a viral aerial view shot of the crowd gathered at Liberty Chowk Lahore. The clip sees protestors reciting the national anthem in unison, making hearts melt. “This is what an unpaid crowd looks like! Pakistan Zindabad,” she captions it.

Sarwat’s husband, actor and plastic surgeon Fahad Mirza reported live from the rally, “This is what happens when people believe in an ideology! A sea of humanity turned out in Karachi to protest the removal of Imran Khan without just cause.”

He emphasised that while Imran, a single entity, was stopped, his supporters will be unstoppable if they unite and rise together. “No corrupt system or corrupt mafia will be able to take advantage of us any longer! Let this be a lesson to us all… in order to preserve and protect our country, our people, our children, each one of us has to stand up and be counted!” 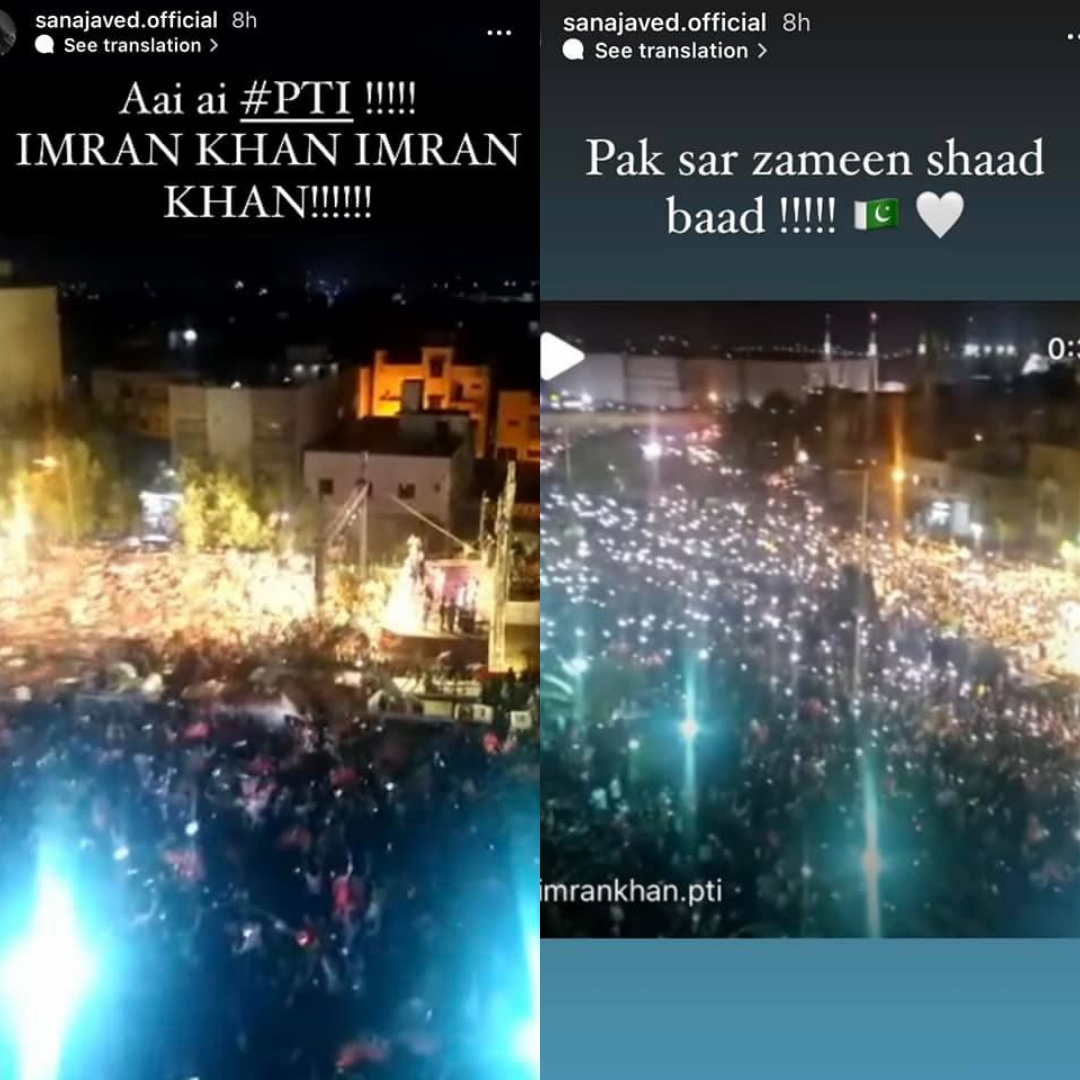 Ahmed Ali Butt and Muneeb Butt also shared videos of speeches and chants while reaffirming their support. The latter also took to Twitter to write, “we are not beggars” and that “we will continue to fight for the sovereignty of Pakistan.”

TV host and actor Azfar Rehman shared a clip from the protest in Lahore to relay how proud he was, “I’m so proud of my nation today. No one can defeat us.” Likewise, actor Usama Khan was also present at the rally held at Liberty Chowk in Lahore. He posted a series of pictures of netizens donning the PTI flag as they march for their ousted leader. 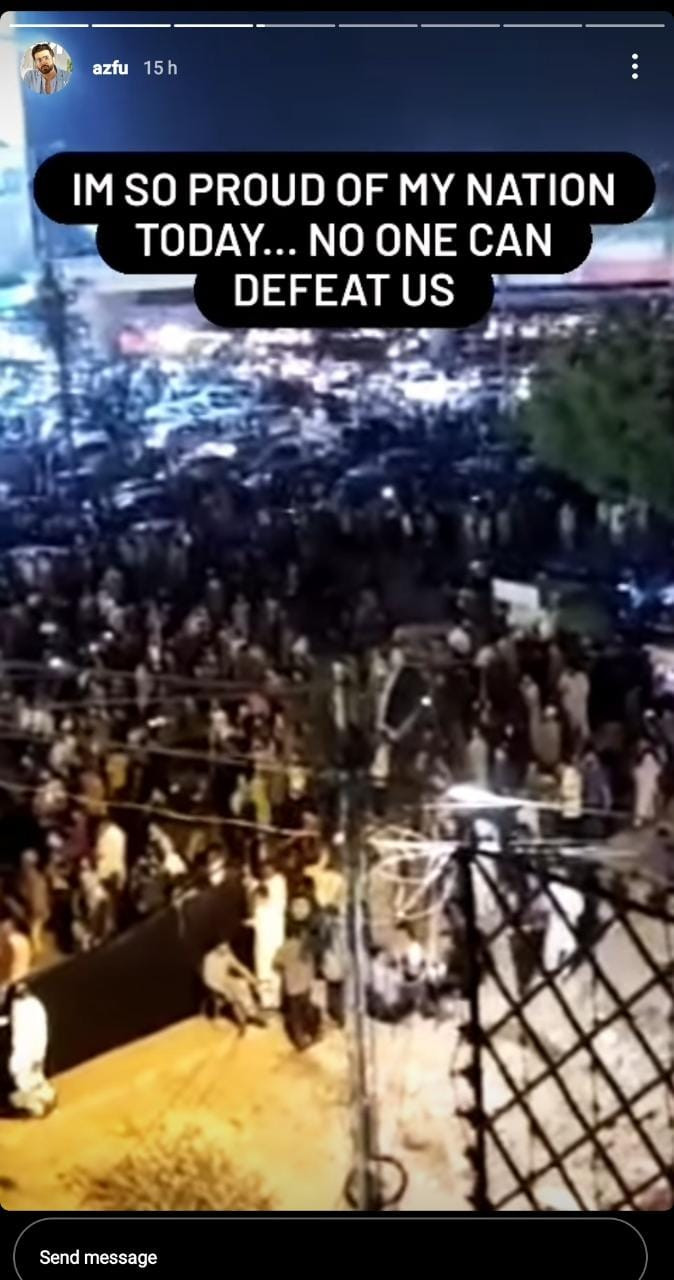 A staunch supporter of PTI, actor Shahroz Sabzwari shared a clip from the rally and called the turnover a “verdict” in itself. He wrote, “we stand with our leader Imran Khan”. 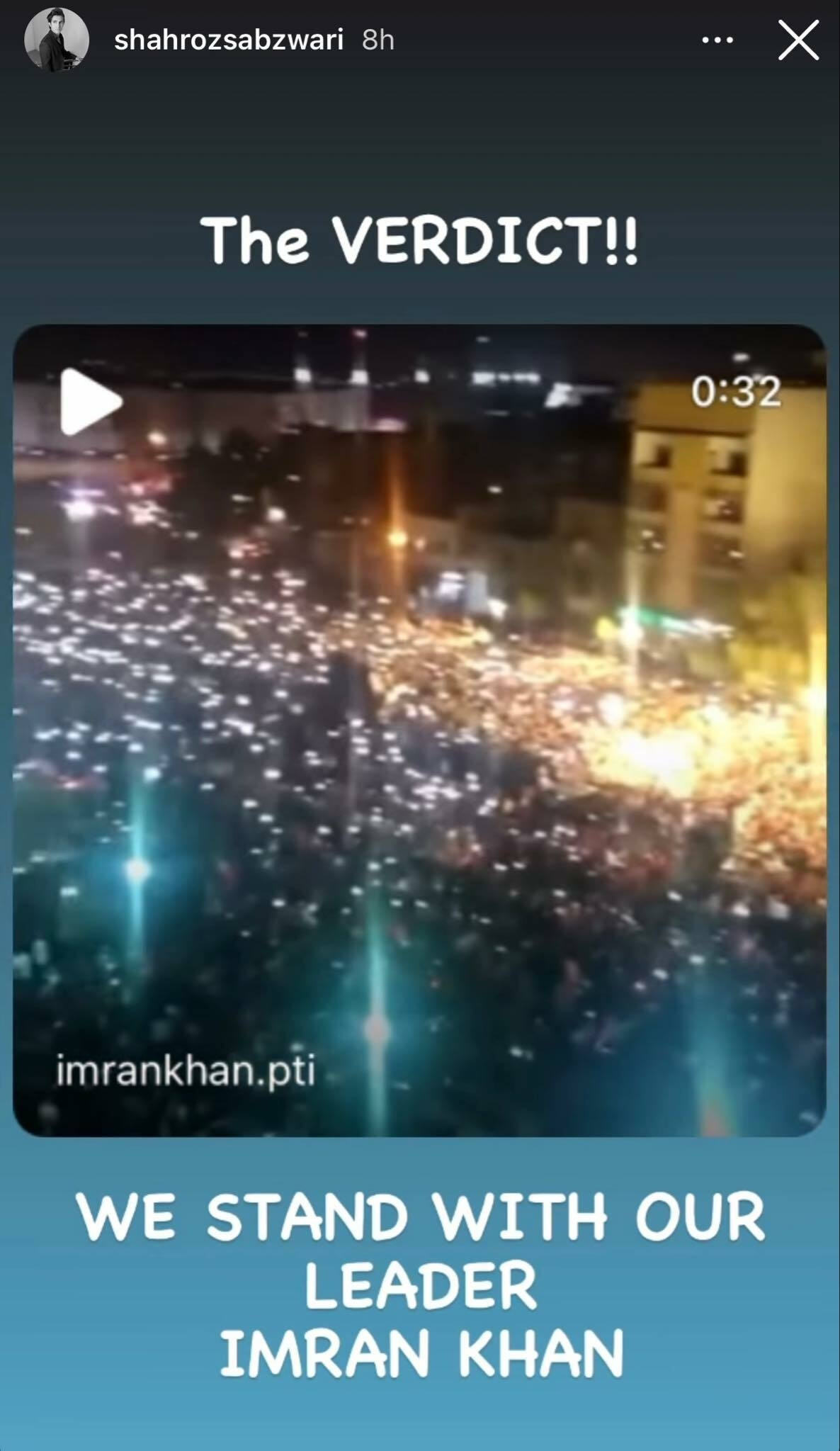 Sharing their take on the current political situation, actor Mariyam Nafees and singer Quratulain Balouch also made attendance at the rallies and expressed their disappointment in the vote of no-confidence.

The Sammi Meri Waar singer shared that “I’ve never shared my political point of view in public but this is the need of the hour and I’m here to support Imran Khan.” She also shared that she will vote for Imran in the next elections.

Sharing a throwback picture with the former PM, veteran actor Atiqa Odho asked people to stand by Imran if they wanted to keep Pakistan “in safe hands and independent of foreign interference.” She also wrote that Imran should’ve been allowed to complete his term and that “political crooks” knew that if he did, he wouldn’t spare any of them.

“They sold out to save themselves and didn’t give a damn about what would happen to Pakistan. What would be more shameful than their behaviour would be us, not speaking out at this time! Don’t go down in history as a nation that didn’t care,” the Humsafar actor reinstated.

Actor Mahira Khan retweeted a video shared on the former PM’s official account to assert, “No, it doesn’t mean any government was/is perfect. Yes, it does mean that we, the people of Pakistan, don’t want history repeating itself again!” She further chanted, “Pakistan Zindabad. Pakistan Paaindabad.”

Singer Annie Khalid shared her experience of attending the protest on the micro-blogging site. Writing about the kindness she experienced, she penned, “Men were making chains with their arms to help women with kids. It was heart-warming. This is Imran Khan’s Pakistan.”

Today at the jalsa I saw random ppl distributing water/cold juices to ppl. Women were protected by random strangers who formed circles around them. Men were making chains with their arms to help women with kids. It was heartwarming. This is Imran Khan’s Pakistan. #LibertyChowk

Singer turned actor Farhan Saeed also tweeted, “What happened today is sad but trust me when I say, today starts the real revolution.”

What happened today is sad but trust me when i say , today starts the real revolution.

Yes its much tougher than we thought it would be but “Ghabrana Nahin Hai” !

Echoing his sentiment, actor Bilal Ashraf remarked that this was just the beginning, “united we stand for a better future, a better Pakistan”.

Actor Shaan Shahid shared a photo of himself with Khan to share, “Tairay saath chal para hai… Yeh qaum ka samandar tujhay hara ker bhi jetaa dia hai tu muqadar ka hai Sikander [this sea of people is with you, this nation has made you win, even when you’ve lost, you’re Alexander the Great]”.

Singer Asim Azhar is of the opinion that those who betrayed Imran to join the opposition meant to oust him, have only rekindled his importance. “Can’t wait for the next elections,” he held. Also lauding the “power of the people”, actor Sanam Saeed shared a clip that Imran posted to his account in appreciation of the “spontaneous” support.

Look what you’ve done PDM.. you’ve made Pakistan realise the importance of @ImranKhanPTI even more. Thank you 😊 Can’t wait for the next elections! 🇵🇰

Music producer Rohail Hyatt, who has been actively reporting on the political chaos on twitter, also held that the nation has only woken up and the images coming in from all over the country are a testament to this. “This is the real victory. No conspiracy can stand in front of this reality. This will not end till IK regains his rightful place as leader of the country,” he wrote.

This quam has woken up. The images coming from all over the country is testimony to this fact. This is the real victory. No conspiracy can stand in front of this reality. This will not end till IK regains his rightful place as leader of the country.#ImranKhan #BehindYouSkipper