Holding on to poetic relevance

‘Roshan rahen chiraghe wafa dekhte raho, shahar nabi (PBUH) me noor-e khoda dekhte raho,’ the couplet, so beautiful and written with such great devotion to the PROPHET (PBUH) will certainly place Ronaq Hayat in the genre of the mystic poets. When he writes ‘aik umar se wisal ki shamen nahi jalin,’ one finds the emotional sensitivity that also defines him as a romantic poet. From love ghazals to spiritual verses, Hayat’s work has much to offer his readers, with a style that is undoubtedly unique and can be described a term in Urdu literature as ‘munfarid’.

Ronaq Hayat had his first poetic explosion in the 1970s and never turned back. He would go on to become famous for his versatile use of the Urdu language in literature, love poems, sublime ghazals and nazam. He also experimented with haiku and many other forms of artistic expression. Hayat wrote seven books between 1995 and 2005, including four collections of ghazals ‘Hijr ki Kehkashan’ and ‘Qurbatain’, Ashk-e-rawaa’ka mausam and ‘Dahakte gulab, a book of haiku poetry ‘Suraj ka ghar’, and a collection of nazams ‘Dhsht-e-hijr’. His collection of devotional poetry ‘Paaon choonay ki talab’ is a unique work of reverence dedicated to the PROPHET (PBUH).

Hayat has been an instrumental activist of literature and has played a significant role in shaping the literary scene in Karachi – holding symposiums and mushairas at KMC sports club, arts council of Pakistan and gymkhana. These meetings bring to life a literary environment that brings serenity to an otherwise turbulent city. He has also introduced decentralized literary activities to involve and promote new and lesser-known writers and poets.

The compassion in Hayat’s work stands out not only because of its poetic nature but also its mystical tone. Interestingly, during our interview the poet kept hidden that he once wished to be a journalist and has written many political articles and columns as well. Hayat speaks about his value in life to serve those who dare write, as he does. He believes that the Urdu language has only been sufficiently recognized for its beauty after the founder of nation, Quaid-e-Azam Mohammad Ali Jinnah made it Pakistan’s national language. Before the partition of 1947, Urdu was mostly influenced by Persian and was deprived of its true status.

A poet of imagination, Hayat quotes Ghalib, ‘aate hain ghaib se ye mazameen khayal me’ – confessing his love and veneration for the great poets of the time. He believes deeply in the preservation of Urdu in its basic form and worries about the future of the language, both as a language of learning in Pakistan’s schools and literature.

An ardent follower of the great poet Raghib Muradabadi, Hayat’s work combines style and rhythm, and his focus shifts expertly from individual to universal. He has written prefaces to books for many great writers and written his own articles and reviews. Hayat graduated from the University of Karachi in 1984, years after his interest in poetry first began. He has worked in the government as a media coordinator and as the founder and chairman of Niazmandan-e-Karachi, which he believes is a platform for poets and writers who would otherwise have no venue to express their creativity. In an interview with the Express Tribune, the poet discusses the different dynamics of Urdu poetry since the time of Mirza Ghalib.

ET: What is Ronaq Hayat’s philosophy of life?

RH: I am a humanist and I have been promoting humanism through my entire life. I served the deprived community by working at different platforms and ran NGOs for the rights of labor community. Besides, I formed Niazmandan-e-Karachi’ to give voice to Urdu writers and poets. I also organize mushairas to give a podium to poets who hardly come into focus. I am struggling for them. Someday my struggle will produce fruits, I believe.

ET: What is the status of Urdu now? Is it languishing; is there a lack of interest?

RH: I think it is not languishing. It is actually decaying as the society lacks interest in its development and progress. Not enough events are organized to attract the society. Even the government institutions are not playing any proactive role in generalizing the language and the literature. There must be other reasons too. But the basic reason behind Urdu losing its status is our faulty education system. Earlier, the government-run schools were generally considered to be the best. But the scenario has changed now. [The] education standard in the government schools dropped down, as they lacked good teachers and other facilities in the absence of funds. On the other hand, private schools with high fees attracted parents, where medium of instruction is English. Children are asked to speak English and even overzealous parents make it a point to speak to their children in English even at home.

ET: Ghalib continues to tower over Urdu poetry. What do you think makes his poetry relevant for all time? Why Ghalib has been set as a milestone?

RH: Ghalib was the first philosophical poet of Urdu, and every generation has interpreted Ghalib in its own way, and it’s the malleability of his character that makes him relevant in all the eras. This is why he has a unique image in the history of Urdu poetry. The great poet started composing poetry in Urdu at the age of 11. His poetry has a deep profoundness of his magical diction, contemplation, and experiences. It is the style of expression that often immortalizes a poet. I consider Ghalib as the Wordsworth of Urdu poetry. He remains alive for poetry lovers because of his andaaz-e-bayan, which was distinctly different from others. Ghalib was people’s poet just like William Wordsworth of England. Both became orphans at an early age. Both had experienced an early bereavement in life and developed a sense of loneliness. The sadness is evident in their poetry. Ghalib lives on as one of the most quoted poets of Urdu. He has written for every mood, occasion, and person. One can find new meaning in every read and see own emotions and desires reflected in his poetry.

ET: At a time when the Urdu language is being linked to a particular religion in India, just as it happened during partition, what future do you see for the literature?

RH: Urdu language has seen many ups and down. Before the historic partition of 1947 Urdu was branded as the language of Muslims. It was linked to Muslims during the lingual and communal riots with nefarious intentions. It is the third great language in the world and the national language of Pakistan. Undeniably it has been enriched after partition. Although, there is a segment in the society and in the system that give preference to a foreign language, yet there are people who are working hard to protect the essence of the language. It may have suffered a brief neglect but cannot die out and there is no threat to its future. 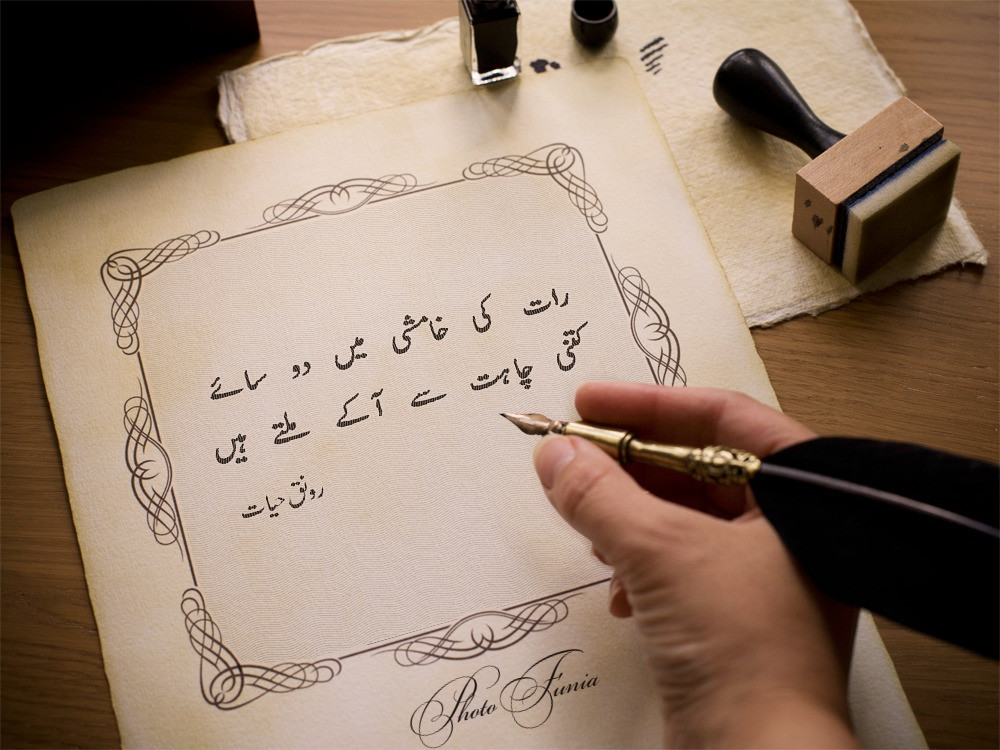 ET: Can poetry be composed under duress? Tell me your shortest time that you took to create a poem?

RH: I believe poetry is not created or imagined, it is inherent and naturally reveals itself. It is an innate part of my life too that keeps evolving my vision and thoughts. It is hard to define duration of creativity. Sometimes it takes few minutes to construct a ghazal or poem while sometimes hours.

ET: Contemporary Urdu poets are treating the concept of haiku seriously. Even you have written in that style. Is it not unfavorable for the development of Urdu’s true format?

RH: In Pakistan the three-line haiku concept was tossed as a charming expression in the 90’s. Yet it has failed to acquire any specific form. Then it was set to its original syllables of 5+7+5. My haiku collection ‘Suraj ka ghar,’ named after its source country Japan, was launched in 1996 and was criticized adversely. But my mentor late poet Raghib Muradabadi came up strong with a positive review in my support and declared it as standard form of poetry. It is just another form of poetry writing and cannot damage the literature I believe.

ET: You have weaved different types and styles of poetry, Have you ever tried a hand on fiction?

RH: As a young and enthusiastic reader, I used to read the novels and short stories of great Urdu writers like Naseem Hijazi, Munshi Premchand, Krishan Chandra, Bano Qudsia, Ismat Chughtai and many other writers of highest order. But I never tried a hand at novels or fictions. Writing fiction or novel[s] involves a lot of technicalities. There is a huge involvement of craft in plotting, sketching characters, and structuring the story. When I started my literary expeditions, I thought the art of prose was not fit for my inner capabilities. At the same time, I found poetry corresponding to my mood and temperament. Poetry defines my expressions and thoughts and suits my natural skills.