Industry veteran Rubina Ashraf’s daughter, actor Minna Tariq, looked as regal as ever in a traditional Dr Haroon ensemble at her wedding ceremony, which was attended by several showbiz A-listers. 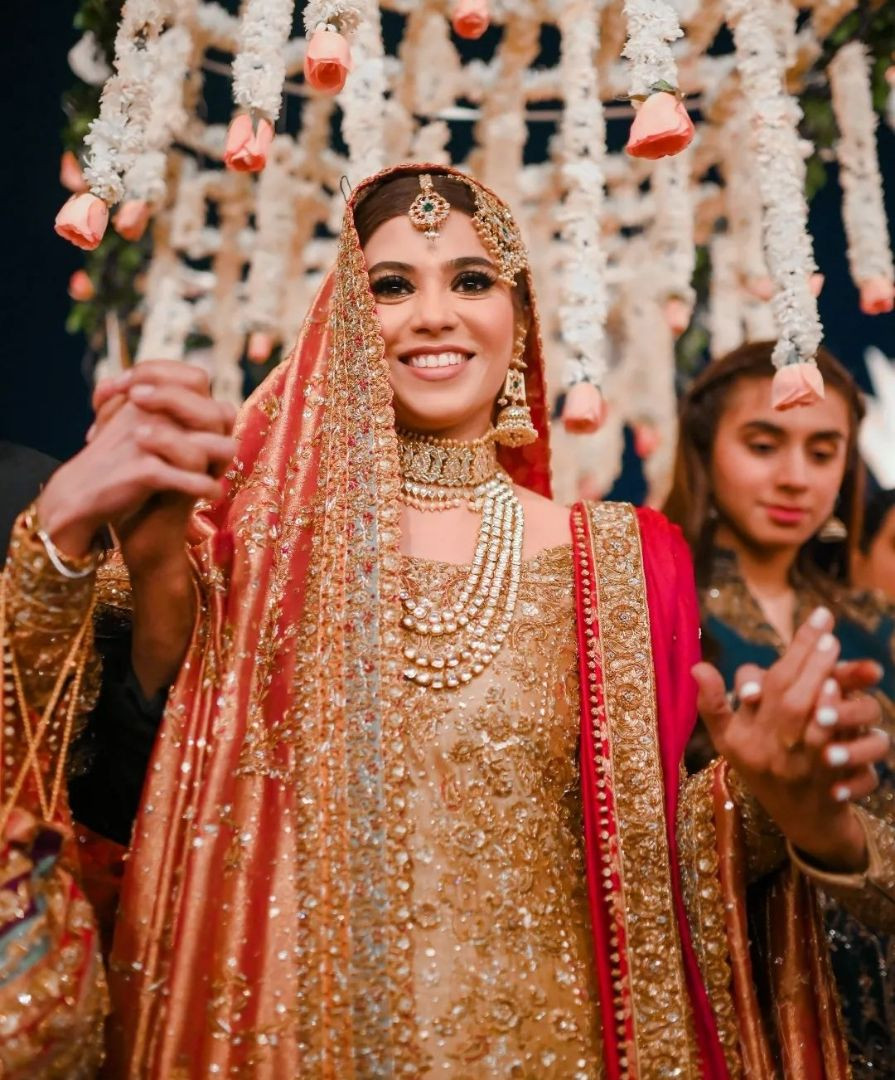 The Ruswai starlet donned a heavily-embellished gold and red kameez-gharara combo, topping the look off with a classic bridal jewellery set by Ali Javeri Jewelers. Her husband, Imran Sheikh, complimented the bride’s royal look with a minimal maroon prince coat and black pants. 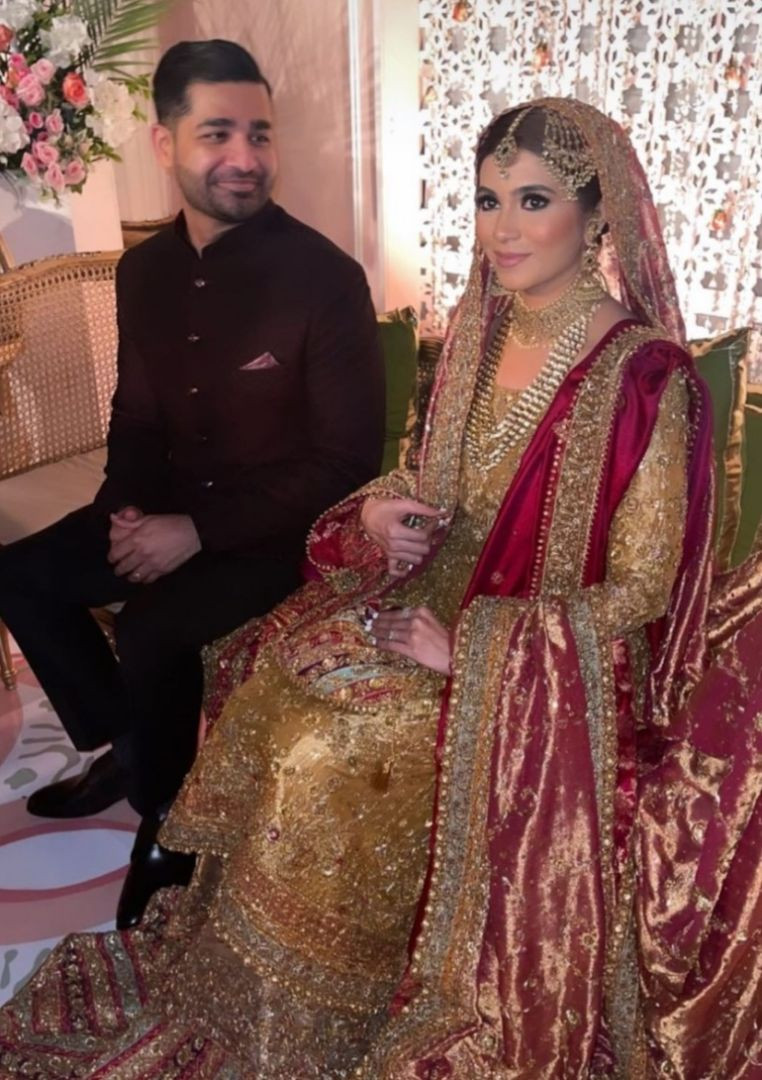 Rubina chose a nude number for the event, complete with a bejewelled clutch and statement choker. The bride was escorted down the aisle by her parents and brother, with Minna’s father and brother both opting for black sherwanis. 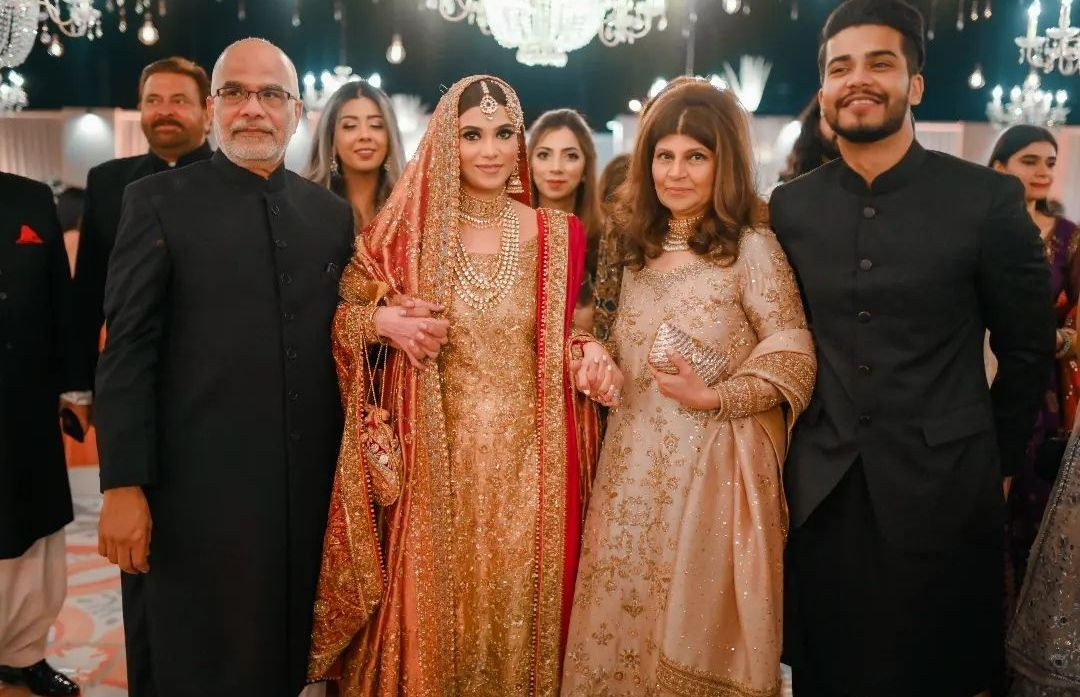 Photos from the event were shared by morning show host Nida Yasir, who attended the ceremony with her husband Yasir Nawaz. Nida wore a blush pink peshwaas, with Yasir donning a white kurta and black shawl. 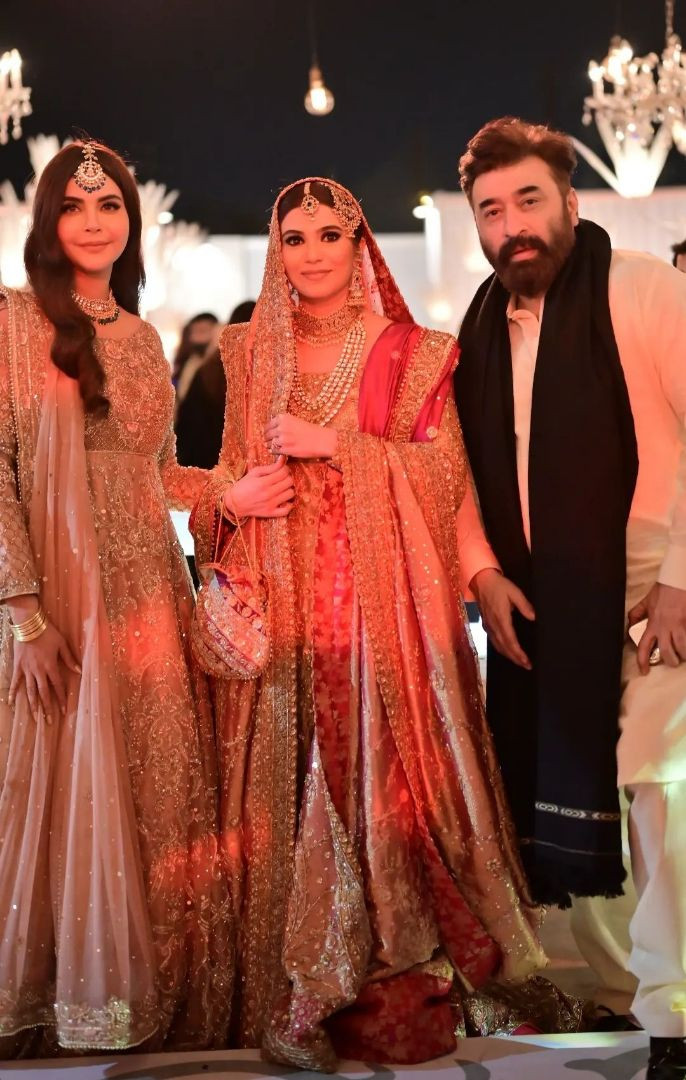 Other celebrities in attendance included Behroze Sabzwari and his family, including his son Shahroz Sabzwari and daughter-in-law Sadaf Kanwal. The latter opted for a winter wedding staple, choosing to wear a maroon velvet kameez and a matching net dupatta. 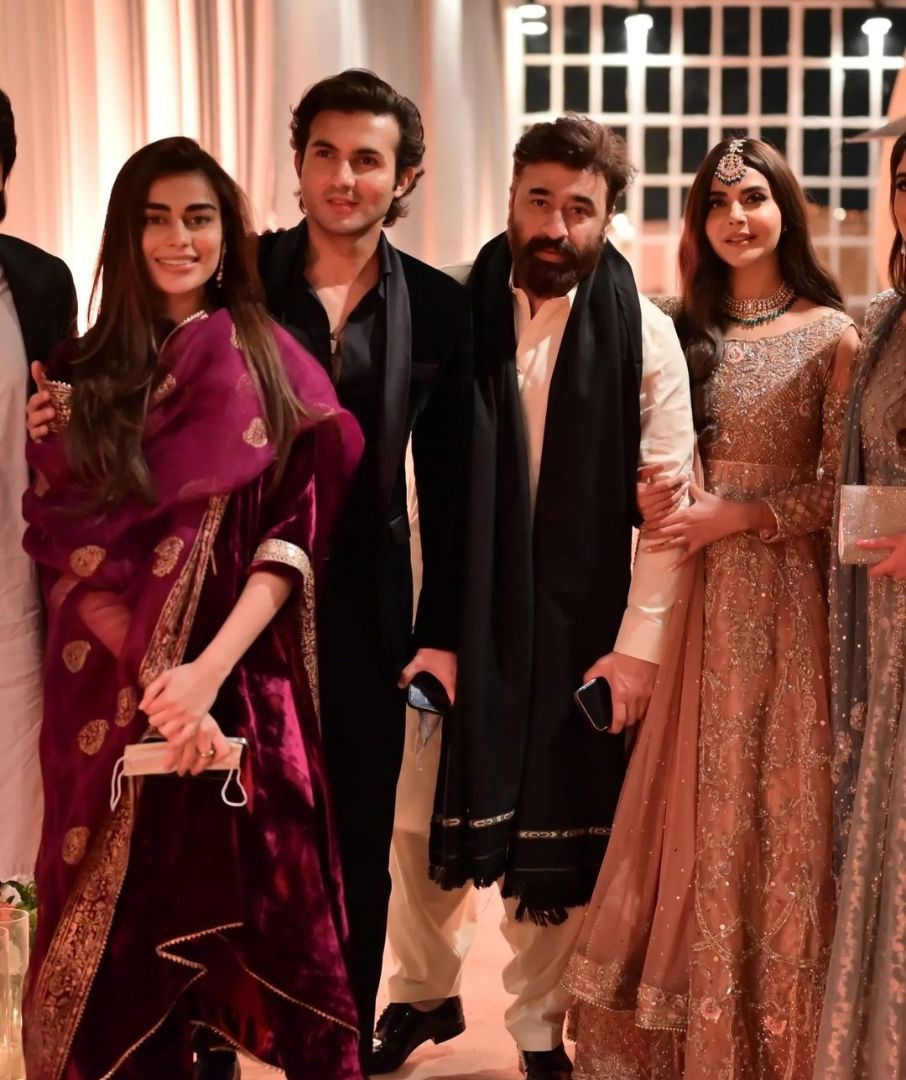 Veteran actors Saba Hamid, Asma Abbas and Javed Sheikh were also on the guestlist. The latter’s daughter Moomal Sheikh was also in attendance, wearing a pastel green outfit to the ceremony. 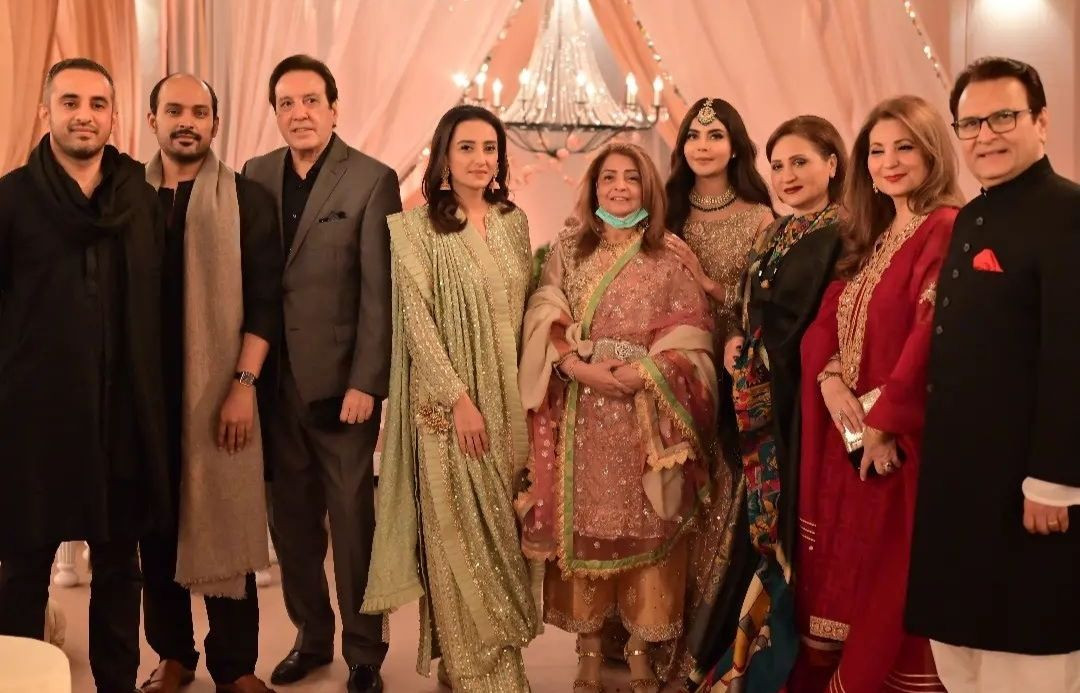 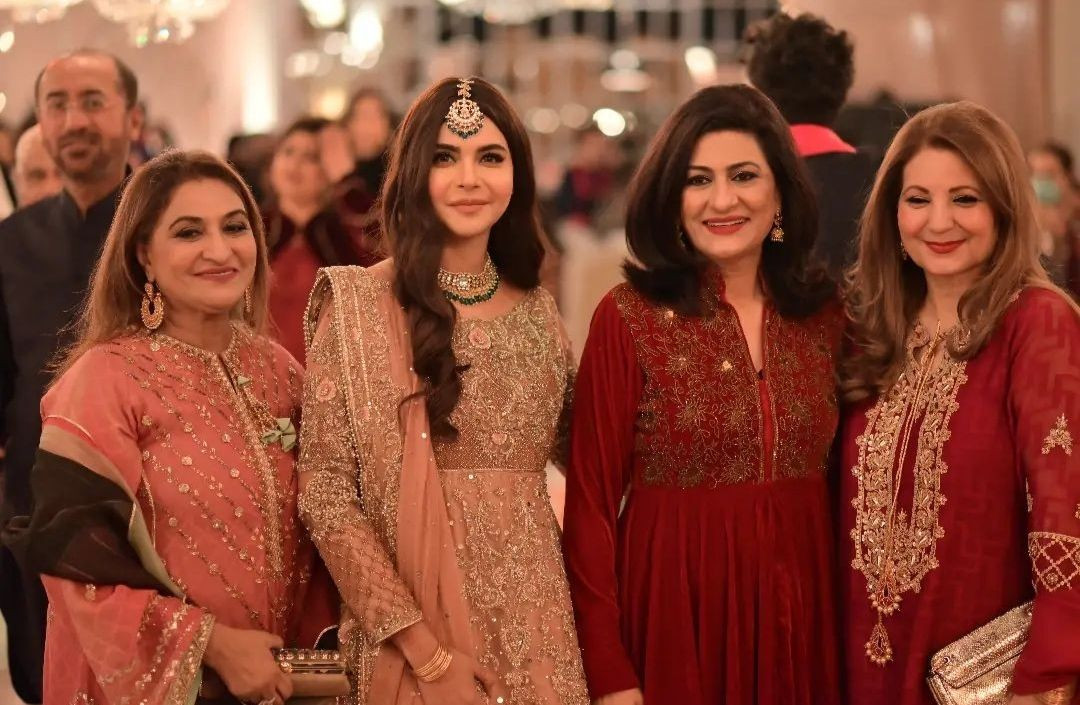 Minna and Imran tied the knot in an intimate daytime ceremony on 13 January, with the bride opting for a heavily embellished silver lehenga with gold embroidery and a hint of turquoise on the blouse.

She paired the ensemble with a diamond-studded choker, chunky jhumkas, and a silver-gold maang tikka. Minna tied her hair in a sleek bun that was covered by her dupatta. On the other hand, the groom sported a white shalwar-kurta with a beige shawl.

Clad in Shalwar Kameez this time, Bollywood’s up for another road trip

‘Not All Men’ but ‘All Women’ feel unsafe around Pakistani men: Anoushey Ashraf on Turkey incident