The battle of belonging

Few words in Pakistan’s collective vocabulary provoke the kind of visceral and knee-jerk reaction as that presented at the mere mention of the word ‘culture’. For internet trolls to Prime Minister Imran Khan, the gulf between the two incredibly wide yet curiously easy to bridge, culture is, at the same time, that which must be protected, as well as the weapon in the hands of those who stand guard. However, for something so fiercely defended (or dismissed), culture, and what it does and does not comprise, are notoriously difficult to define and demarcate.

Despite its complexities, attempts at enforcing a singular, homogenous culture of the Pakistani people, a concept inherently flawed due to the diverse ethno-religious landscape of the country, continue to batter most outlets of artistic expression. The consequences beyond the realm of art are another discussion entirely. If Pakistan’s dwindling creative industries, especially those of film and television, are any indication, then one of the greatest casualties of this cultural sterilisation are the stories we no longer can or wish to tell. The pool of stories to choose from is suffocatingly limited, and while the dearth of varying narratives may be due to the institutional boot on the neck of the storyteller, more often than not they will climb into a coffin of their own volition, claiming martyrdom for the cause of culture.

The question of culture

Questions of identity and inheritance lie at the heart of the great culture debate. What is Pakistani and what is Indian? What is Hindu tradition and what is Muslim? Is this their story to tell or is it ours? Recently, Indian filmmaker Sanjay Leela Bhansali announced that he will be teaming up with Netflix to helm a series on the infamous Mughal-era Shahi Mohalla of Lahore, more commonly referred to as Heeramandi. The backlash from the Pakistani industry was instantaneous.

How could an Indian filmmaker tell the story of a locality that falls within the national borders of Pakistan? Actor Ushna Shah, asserting that the Mughals (who ruled an undivided India for around three centuries) were part of Pakistan’s cultural inheritance, claimed that an Indian director taking on a project based on Mughal history would be the equivalent of a Pakistani using the Mahabharata, a key religious text in the Hindu tradition and a classic of world literature, as a source of inspiration.

While several actors attempted to rally support for their cause, maintaining their right to tell the story of Pakistan’s most famous red-light district, known for housing courtesans during the time of the Mughals and serving as a domain of the modern Pakistani sex worker in the present day, the Pakistan Electronic Media Regulatory Authority (PEMRA) imposed a blanket ban on any show of physical intimacy between couples, even those belonging to the married variety, infidelity and ‘vulgar’ clothing on television, stressing that such displays “disregard Islamic teachings and the culture of Pakistani society”. Which cultural take is closer to the truth depends on who, when and where you ask.

Perhaps more alarming than the claim of Pakistani monopoly over Mughal history in its entirety is the blatant disregard of a rich tradition of a shared non-Muslim inheritance. The celebrated writer Intizar Hussain once explained in an interview, “I am an inheritor of a way of thinking and being in which boundaries are always porous, always shifting, that I can accept without hesitation that there is a grave of a Muslim disciple of Krishna in Vrindavan. The lives of Muslims and Hindus are so deeply enmeshed that the two cannot be separated.”

Hussain derived inspiration from a host of literary sources beyond those considered part of the Islamic tradition, which is most readily accepted in Pakistan (that too in an increasingly surgical manner). The Jataka Tales, narrating the stories of the many previous incarnations of the Buddha, the Ramayana describing Ram’s quest to rescue his wife Sita, and the war epic Mahabharata have existed in tandem with Alf Layla, Dastaan Amir Hamza and Qissa Hatim Tai, all part and parcel of the rich literary tradition of the Subcontinent. Recently, a TV show starring actor Usman Mukhtar was announced based on famed trickster and companion of Amir Hamza, Amar Ayyar. With the influence of the Dastaan stretching across South Asia and the Middle East, whose inheritance and national borders does the mystical realm of Qaf fall into?

Shah’s comment on the Mahabharata existing outside of the literary jurisdiction of the Pakistani people stands diametrically opposed to Hussain’s worldview. Even if the actor’s faulty perception of Mughal ownership is taken at face value, the fact that Akbar, during his reign, commissioned a fully-illustrated Persian translation of the Mahabharata leaves Shah’s argument, presented vehemently and without invitation on several occasions, in tatters. Titled Razmnama or Book of War, the loose translation was meant to further Akbar’s political ambitions, promoting communal harmony among his subjects, which comprised both Hindus and Muslims, spread across the regions known today as India and Pakistan.

The presence of the Katas Raj temple within the national borders of Pakistan’s Punjab province, with the sacred pond in the complex said to have been formed after the tears of a mourning Shiva fell to Earth, the temple later serving as a brief stop for the Mahabharata’s Pandavas during their fourteen-year exile, further cements the impossibility of a Hindu-free Pakistani heritage. 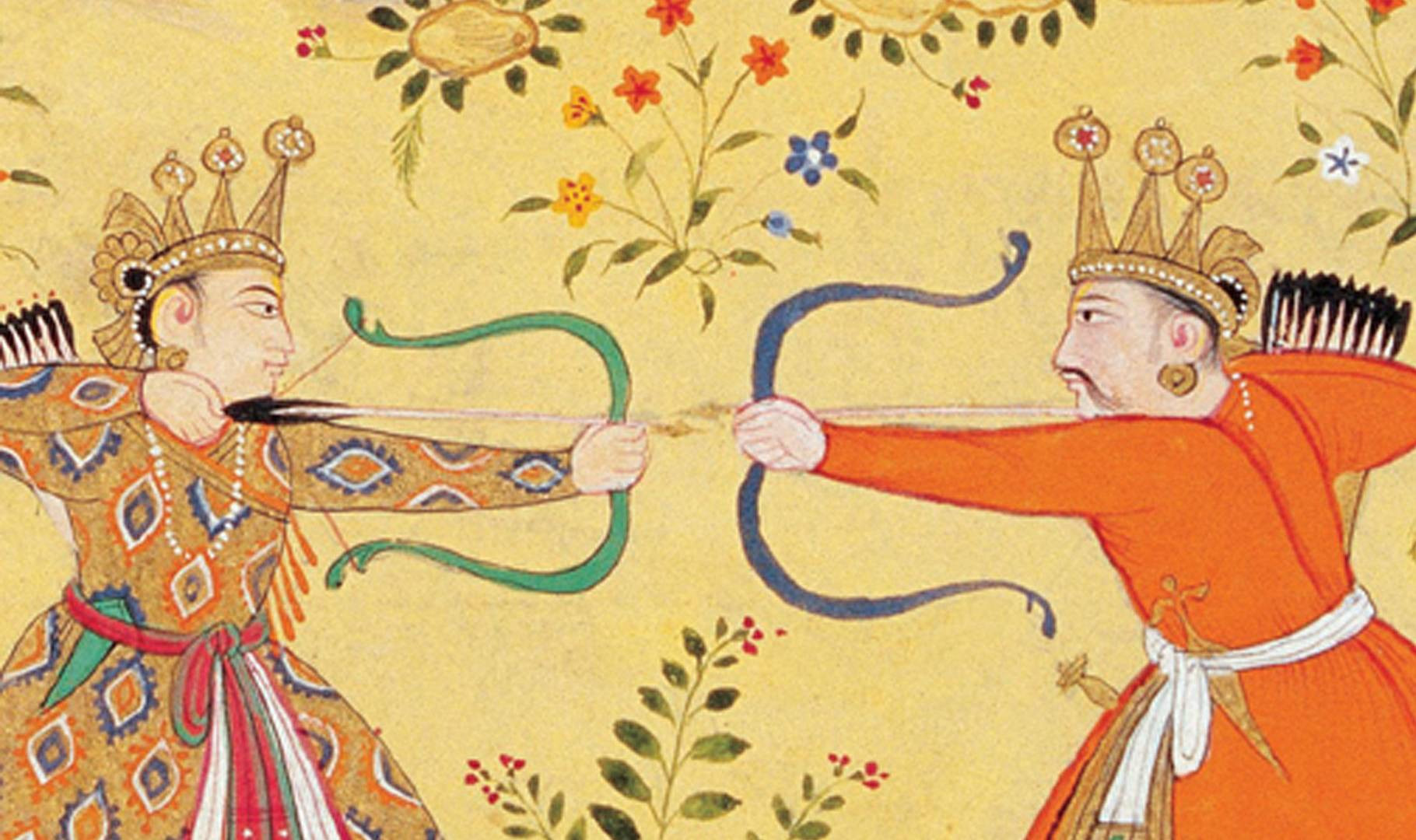 Perhaps it is imperative to understand that the battle of cultural ownership, of both material objects and spaces, as well as items of a more intangible variety like stories and customs, appears to be born out of an artificially produced necessity. Pakistan is in its relative infancy and the need for a separate identity built in opposition to that of pre-Partition India, complete with an alternate historical timeline and traditions wiped clean of any overtly Hindu influence, regardless of the large population of Hindus that continue to reside in the country, are deemed vital to ensure a sense of national belonging, often conflated with that of the religious variety. We cannot be ‘them’ and they cannot be ‘us’. Commonality and shared experience defeat the purpose of separation.

It was only in the latter half of the 20th century that cultural heritage became so intensely tied with ideas of nationalism. With the 1954 Hague Convention aiming to ‘protect cultural property’ in the event of armed conflict, culture became a matter of national sovereignty. This property included “monuments of architecture, art or history, archaeological sites, works of art, manuscripts, books and other objects of artistic, historical or archaeological interest, as well as scientific collections of any kind regardless of their origin or ownership.”

Fascination with the past or the desire for familiarity with one’s roots aside, with the Hague Convention, culture became an asset to be actively guarded. Additionally, with the modern concept of nationhood so deeply reliant on imagined communities of homogenous nature, the need for a singular culture, as well as heritage, became a fundamental need, especially in newly-formed states such as Pakistan. It is here that the true political power of stories comes into play in shaping narratives, for better and for worse.

Whether it’s Pakistan’s obsession with beginning its history from the moment Bin Qasim set foot on the shores of Sindh, establishing Muslim rule over the supposed racially-inferior Hindu population, or the Indian state’s love-affair with claiming ancient Hindu ownership of the land now known as Hindustan, and lamenting the later take over by Muslim barbarians, narratives of cultural heritage dictate modern-day politics. Even in the United States, government buildings built in the likeness of ancient Greek architecture establish an inaccurate continuity from the Greek to modern Western civilisation. Looking towards the imagined past shapes the confused present, with heritage becoming a tool of great political power.

When engaging in discussions and debates over national heritage, it is of paramount importance to ask, who decides what parts of a culture can and cannot be claimed as inheritance by its people? It is here that one begins to realise that dominant narratives of cultural heritage aim to benefit those in power, with ethnoreligious minorities often left at the mercy of the influential majority. The rhetoric of a singular national culture thus works to further subjugate minority groups, more often than not violently so.

National histories are fabricated and destroyed often, and with changing narratives of the past come varying definitions of the cultural heritage of a country’s people. However, while official narratives transform depending on political climates, it remains that culture is not immutable and is instead ever-changing, constantly in flux like a river gathering sediment from wherever it runs. And like a river that eventually merges with another, the boundaries are just as muddled and hazy.

Regardless, a global society so heavily focused on identity does not take kindly to that which is difficult to classify. In the modern world, where a sense of alienation permeates across populations of increasingly distant people in an unprecedentedly connected world, the illusion of a fixed identity serves as an anchor. For a people starved of belonging, increasingly confused and untethered, regardless of which side of the border one chooses to look at, the questions of identity and ownership are sensitive ones, bound to trigger some level of emotional outrage in the theatre of social media.

With ‘cultural property,’ the intangible becomes commodified, and ownership of commodities must be claimed. In her tirade against Bhansali’s Heeramandi venture, Shah deemed the director’s project an ‘appropriation’ of Pakistani culture. The level playing field between India and Pakistan would suggest otherwise. How does one steal something from another that was shared between the two to begin with? This is not to say that issues of appropriation do not exist, but that they do so in conjunction with a pre-existing power imbalance. When choosing to share narratives that may not immediately be one’s own, it is best to ask who’s story is being told to whom, and to what end. However, one cannot threaten to aim nuclear warheads at one another and claim victimhood in the same breath.

Creativity in Pakistan is stagnating, yet talk of the ‘revival of Pakistani cinema’ is thrown around with careless abandon, despite the fact that in searching for the much-needed spark on the silver screen, TV appears to have slowly lost its lustre as well. Each week brings with it announcements of more of the same, each time with some level of increased fanfare. Ping-ponging between the latest army offering and narratives of domestic disputes, a rich shared tradition stands ignored over petty disputes of ownership.

While the country suffers from the silencing of stories that cannot be told, due to reasons ranging from religious extremism to disapprovals of a more political nature, the repeated refusal to embrace diverse and colourful narratives due to a misplaced sense of patriotic duty during a time of such severe creative lack is nothing short of a tragedy. Perhaps if the film and TV industries opened themselves up to telling stories of shared human experience, not just those that feed into the narrative of cultural differences and, more often than not, superiority, salvation, even the coveted “revival” may end up just within reach.