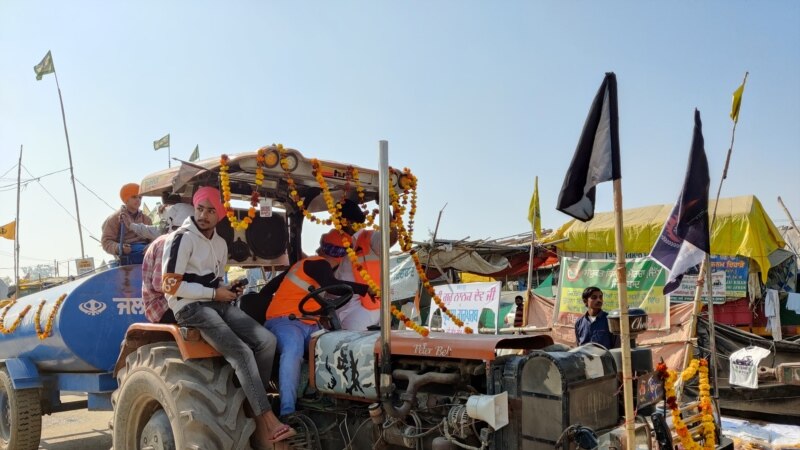 Joyous celebrations at protest sites near the Indian capital, New Delhi, mark the victory farmers from the north have won with Prime Minister Narendra Modi’s recent decision to repeal three contentious farm laws.     It was a hard-won battle for farmers who camped and cooked on highways for a year, weathering a harsh winter, summer and a pandemic. The biggest protest during Modi’s seven-year rule was born out of concern among farmers that the pro-market reforms passed last year posed a threat to their land and livelihood.     ““The truth always prevails. Our struggle was for a just cause — we were fighting for our rights,” said Sajjan Singh, a farmer from Punjab.  It was a peaceful but strong protest. This is a victory of the nation, of farmers.”       The mood is upbeat but somber – the sudden announcement of the repeal of the laws on Friday by Modi, a powerful leader with a reputation for seldom backing down took many aback.      Farmers say their sheer persistence, patience and dogged determination to stay the course paid off in their confrontation with one of India’s strongest governments that critics say does not tolerate dissent. “This is the first time that the government has conceded to protestors demands. Otherwise, they are always chased away by police,” said Jarnail Singh, an elderly farmer said with quiet satisfaction. “But we from the Sikh community were prepared to die for our cause.”    He has been helping run a community kitchen that fed hundreds of farmers daily at the biggest protest site on Delhi’s border at Singhu, where tractor trolleys and temporary homes erected on the highway stretch for more than a kilometer, resembling a mini settlement. “Even now, we are stocked with rations for six months.”   The stir was initially led by Sikh farmers from Punjab, but soon after farmers from the states of Haryana and Uttar Pradesh also joined the protest.      Known for their organizational skills, Sikh volunteers have a reputation for community service, whether it is helping people during natural disasters or feeding the poor. This time they used the same skills to sustain the massive protest for a year.      Although the flashpoint that led to the protest has been resolved, the farmers are not yet preparing to uproot their bamboo structures or return to their villages.    Having savored victory, they are pressing for another demand — a legal commitment for buying all farm produce at a guaranteed price. The system is prevalent mainly for rice and wheat in two northern states from where many of the protestors came.     “Farmers from all over the country have lent support to our cause. Now we have to make sure everyone gets an assured price for their crops,” said Harjinder Singh, an elderly farmer from Punjab who has remained at the protest site since last November. Although he wants to return home, he and others are prepared to continue with the struggle.      After a mass rally in the state of Uttar Pradesh on Monday, farm leaders said in a letter addressed to the prime minister that “minimum support price based on the comprehensive cost of production, should be made a legal entitlement of all farmers.”     Farmers have long been demanding a better price for their crops, saying agriculture has become unsustainable due to rising costs of inputs such as fertilizer and seeds, and adding that their incomes have become stagnant. “We farm because we have no other option. There are no jobs we can get. Where will we go? That is why our land is so important to us,” said Sajjan Singh, who like many others in India calls his plot of land his mother.       The capitulation on the farm laws by Modi is widely attributed to his Bharatiya Janata Party’s need to regain the support of farmers ahead of elections in key states. Farmers make up a huge voting bloc in the country.     “The Prime Minister has stooped to conquer,” said political analyst Neerja Chowdhury. “I think he has calculated the balance of advantage lay in taking a back step than to continue with the standoff that had taken place.”     While both Punjab and Uttar Pradesh states head to the polls next year, the main concern for the BJP is to hold on to power in Uttar Pradesh, the country’s largest state.       “The BJP government in Uttar Pradesh has been losing ground because of handling of the Covid crisis, rising prices, loss of livelihoods, all that has taken its toll,” points out Chowdhury. “The ground reports from western Uttar Pradesh, whose farmers had joined the stir, indicated things were not good for the party.”      But despite the huge concession by the prime minister, it may not be easy to woo them back and rebuild his image of a pro-farmer leader in the coming months.         The year-long protest has frayed trust between the farmers and the government. Days after Modi urged them to go home, they are still huddling at protest sites on Delhi’s borders.     “Until we see in writing that the laws have been repealed by parliament and the order is signed by the president, we will not vacate the highways,” Sukhpreet Singh said.